Quote of the Week: Sounding Vampires 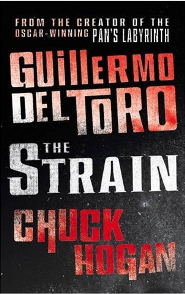 From The Strain, the new vampire novel by Guillermo del Toro (Cronos, Pan’s Labyrinth, the forthcoming two-part The Hobbit) and Chuck Hogan (The Prince of Thieves):

“Now she was hearing it again. Same noise she’d been hearing since arriving for her shift, only steadier now, louder. A humming. A droning sound, and the weird thing was, she heard it at the same volume whether she wore her protective headphones or not. Headachelike, in that way. Interior. And yet, like a homing beacon, it strengthened in her mind once she returned to work. … The noise sounded like no machine she had ever heard. A churning, almost, a rushing sound, like coursing fluid. Or like the murmur of a dozen voices, a hundred different voices, trying to make sense. Maybe she was picking up radar vibrations in her teeth fillings.”

The “she” above is an airport employee who’s now twice been drawn toward the airplane that serves as the initial mystery driving the plot of The Strain. The novel’s pretty solid, if far more told than written, the words focused on getting the story across effortlessly and quickly, rather than in using language to get deeper into the characters (the major ones, with the exception of an aging vampire-hunter, being fairly cookie-cutter, though there are a lot of strong incidental character sketches) and the narrative. The novel is a sort of “hard fantasy,” a parallel to hard science fiction, in that del Toro and Hogan go into great detail about how vampirism functions. Del Toro fans will find examples here of the sorts of fetishized objects that have served as touchstones of revelation in films such films of his as Cronos, The Devil’s Backbone, and the Hellboy series.