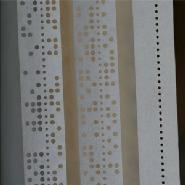 Chiptune musician Matthew Applegate (aka Pixelh8) doesn’t make all his music out of 8-bit technology — he goes even further back, as the punchcards on the cover of his recent Obsolete? album show. He also weighs heavily on the question mark in the album’s title, employing various ancient computers to purposes (1) for which they weren’t intended and (2) that might, just might, rescue them from obscurity. Fortunately for Applegate, and for us, he didn’t have to rummage through the dustbins of history to gain access to these archaic tools. He got a gracious invitation from the the UK National Museum of Computing to make use of its substantial holdings. According to coverage of an event Applegate performed at the museum, he drew from the following equipment:

With a name as suggestive as “Applegate,” it almost seems like the Pixelh8 moniker is unnecessary, though the addition of the “h” definitely signals some interesting ambivalence on the musician’s part. The sample track on his pixelh8.co.uk website offers what appears to be a series of excerpts of Obsolete?, all gleefully mechanistic and deliciously lo-tech (MP3).
[audio:http://pixelh8.co.uk/wp-content/uploads/2008/09/obsoletemedley1.mp3|titles=”Obsolete? Excerpts”|artists=Pixelh8]

More on the event at the museum’s website, tnmoc.org, and courtesy of an interview at newscientist.com, in which he explains:

“I’ve gone right back to the beginning of what computers can do in terms of sound. It’s not just about sound chips, but the electromechanical sounds they make: the fans, the tape readers, the teleprinters — crunchy sounds.”