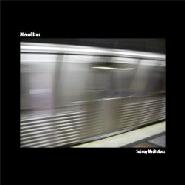 There are subways in Los Angeles and San Francisco, though they’re not as well known as their counterparts in New York City and London. Director Michael Mann focused the climax of his LA-centric film Collateral on the subway there, but the visual impact was about dissociation, not orientation; like much of that film’s settings, the subway location provided an unfamiliar, disorienting vantage on an otherwise familiar place. In San Francisco, it isn’t called a subway — it’s called BART — but that’s what it is (even though, as in New York, and London, and Los Angeles, it isn’t entirely submerged).

Bross goes into detail on the album’s production on his website, at bross.com:

For me, riding a subway train is both hypnotic and calming. The sway of the car. The click of wheels against black metal rails. The long echo of brakes down dark tunnels. It’s a space that allows me to think, to contemplate. I’m able to forget myself and, in the process, gain a glimpse of how I fit into what writer Willa Cather called “the immense design of things.”

Additional details at the website of the releasing record label, deeplever.com.

One thought on “Subway Meditation MP3”