The little sound-toy and audio-game apps showing up on systems like the iPhone are multiplying so quickly, a filter might be beneficial toward separating sound-making wheat from auto-tune chaff. One such filter is to observe the blogging of working musicians, to see which of these apps (from hand-held four-track recorders to iPod sequencers to Nintendo DSi time-stretchers) make the cut of people who are used to producing music on something more established than, say, their cellphone.

John Keston, founder of audiocookbook.com, has singled out the cartoony Bebot as one of his favorite such apps, and in late July he posted a little song that he composed on it (MP3). It’s a sweet if maudlin tune, Eno-esque synth baubles (soft little willfully artificial pings and bleeps) eking out a little melody. Keston’s experiment exemplifies how these sorts of sound apps seem especially appropriate for experimenting with melodic development. Listen as he slowly replays, with each pass, something nearly equivalent to his initial melodic riff, but with the successive iterations doing something slightly different — dropping in or out a note, playing with phrasing, employing once-only filigrees.

In fiddling with various apps, Keston asked the straightforward question: “which apps might lend themselves to being productive tools for creative artists?” And he praises Bebot as something that, as he put it, “could be used effectively for performances and recording.” Here’s an image of a typical Bebot screen: 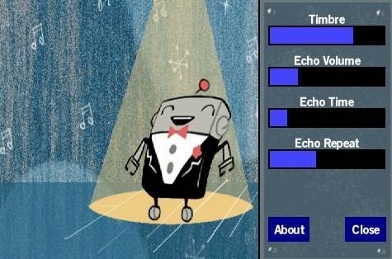 In the app, you manipulate the little robot to make sounds. The promotional material lists among its features “4-finger multitouch polyphony, multiple synthesis modes, user-definable presets and scales, tweakable synth settings and effects.”

More on Bebot at the website of its programmer, normalware.com. More on Keston at johnkeston.com. Above screenshot from the appcraver.com/bebot review.