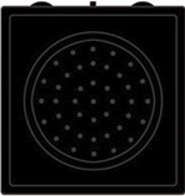 The latest bit of information about the forthcoming Gristleism gadget is just 194 KB in size, just 19 seconds of sound — but that’s a valuable chunk of information, because it’s the first evidence of the loops that are included as part of Gristleism. The device is a team-up between FM3, creators of the Buddha Machine, and Throbbing Gristle, the band that has been said to have invented industrial music. It’s a small, handheld machine containing various short loops of sound, and it includes the ability to slow and speed up each loop. The sound quality is reportedly significantly higher than was the case with the Buddha Machine, of which there have been two versions thus far.

This initial loop (number seven on Gristleism, judging by the track title) is a sliver (MP3) of “Lyre Liar” off Throbbing Gristle’s 2007 album, Part Two The Endless Not. Not heard is Gristle’s Genesis P-Orridge intoning “lyre liar” as if he were imitating Ozzy Osbourne having woken up too early, as is the case on the original song. What is heard in the loop is the gutter churn of flanging noise, and the countervailing mechanoid wah-wah that made the original track so threatening — as well as so inherently useful as a loop.