Quote of the Week: Sound Toys for Tots 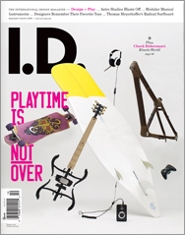 The editors at I.D. magazine, for its current (September/October) issue, asked over two dozen people to recollect an “iconic toy” from their childhoods, and to provide an “emotional design critique” of that object. The full collection of 27 such childhood recollections, each with illustrations by Maayan Pearl, such as the one below, is available at id-mag.com. Contributors to the I.D. feature included John Maeda, designer; Syd Mead, responsible for visuals in the films Tron and Blade Runner; Rob Walker, author and friend-of-Disquiet; and Nicholas Negroponte, who having recommended his own XO laptop, might not have fully grokked the brief.

This is the contribution by Ron Arad, architect and designer:

I had a toy called a Big Ear. It looked like a satellite dish: a tripod attached to a big bowl, with earphones, earplugs, and a headset. When you pointed it in any direction, you could hear conversations between people some distance away. It even went through walls, and seemed to me like something from the future. I was 7 or 8 years old, and I was a spy! I was so amazed that a dish that like that could hear through walls that it made me think differently about walls themselves, about materiality and immateriality, and about how informaiton travels through space.

The subject of Arad’s reminiscence is the sole one among the 27 objects in I.D.‘s survey that involves sound, which for all the tin xylophones and My First Sony toys of the past, brings to mind a question: Are there more sound-making toys today than there were in the less electronically mediated past? Think of how today there are so many noise-emitting, audio-constructing devices in our age of computer games, portable apps, and widespread electronic music-makers. My presumption is that abstract, undirected musical play is much more common today than ever before. The question, now, may be whether kids raised on sonic toying and audio-games will continue, as they get on in years, to include them as part of their lives, habits, and art — or whether the instinct to play with sound will become something left behind in the toy box, if not the dust bin, rather than discovered later on in life.