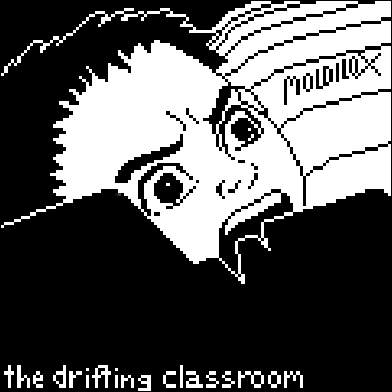 The world of video-game music is just that, a whole realm unto itself, with its own rules, its own obsessions, its own stars, it’s own logic. Judging by the sheer density of video-game-music sites, there is a large group of people much of whose listening time is spent on pixelated tunes that, by tone and intent, might just as well have been recorded in the early 1980s. But where there is healthy obsession there is absurdity, and there is humor. And all that insular hyperactivity isn’t uniquely characteristic of chiptunes, as the 8bit-music world is called. It describes numerous rich subcultures, notably the world of manga and anime.

Thus it’s no surprise, except in terms of delight, that something along the lines of the The Drifting Classroom: The Game: The Soundtrack should exist. The album is a parody of a parody, or a tribute to a parody, or a parody of tributes, or something like that. What it is is an album of 8bit video-game music, purported to be sourced from an old Famicon video-game, based on the manga Drifting Classroom by Japanese horror legend (and a personal favorite of mine) Kazuo Umezu. Except there is not such Famicon video-game. What there is is a thoroughly imagined suite of shortz esrzatz video-game music, built around the theme of Umezu-sensei’s series, in which an entire school goes missing, leaving a gaping hole where it once stood. The titles of the tracks (“Mutant Mushrooms,” “Killer Cult”) are drawn from scenarios in the story, and the music is fully envisioned: rapid themes for fight sequences, minor-key horror-film cues elsewhere. There are 14 tracks in all. One favorite is “Stage 5 ”“ Underground,” a spooky, downtempo piece (MP3).

The collection is credited to Moldilox, aka Joseph Luster. Full release at beepcity.com. More at thejosephlusterreport.blogspot.com, including a photo of Umezu-sensei himself holding a CD of the ersatz soundtrack. Lots more Moldilox music at his page at 8bitcollective.com.