There is a lot of intriguing music streaming in the feed of the SÃ£o Paulo, Brazil”“based musician who identifies as Asvfuks on the SoundCloud service (and on Instagram, among other places). The track “A DivisÃ£o Do JoÃ£o,” by way of example, seems to be based on a snatch of music by JoÃ£o Gilberto, the bossa nova great whose picture is featured on the track. Gilberto’s voice and acoustic guitar appear to be heard at the opening and close of “A DivisÃ£o.” A loop of that initial vocal fragment steers the sample into uncanny-valley territory, while the accompanying shaker finds a semi-modern rhythmic contemporary in a broken 8bit beat that persists for the majority of the track, before it all comes to a close with a coda of the original source audio.

Create music for a fake movie whose plot is "Poltergeist meets Wreck-It Ralph." 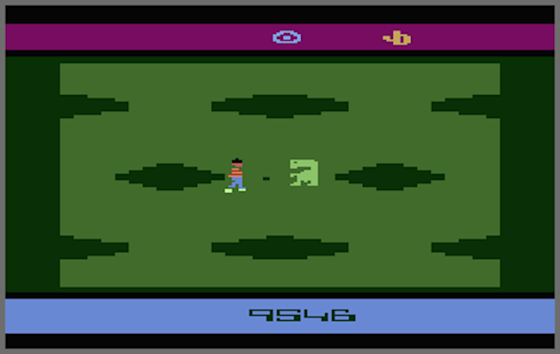 This project was published in the early evening, California time, on Thursday, May 1, with 11:59pm on the following Monday, May 5, 2014, as the deadline.

This week’s project is fairly open-ended. The essential thing is that your music has an “8bit flavor” — define that as strictly as you wish.

You will write the opening theme music for a movie that doesn’t really exist. The film is a horror flick. The elevator pitch of the movie’s plot is “Poltergeist meets Wreck-It Ralph.” The opening sequence involves a housing development being constructed on the site of a former city dump. The construction crew discovers the burial site of one million cartridges of the ET Atari video game. The developer decides to pour concrete over the ET cartridges and continue building. But something has been awakened. Hundreds of thousands of 8bit ETs cannot be kept down!

Your music will accompany a film montage (again, this is entirely imaginary) covering the above description, which should last between two and four minutes.

Length: The length of your recording should be between two and four minutes.

Title/Tag: When adding your track to the Disquiet Junto group on Soundcloud.com, please include the term “disquiet0122-8bET” in the title of your track, and as a tag for your track.

More on this 122nd Disquiet Junto project — “Create music for a fake movie whose plot is ‘Poltergeist meets Wreck-It Ralph'” — at:

The great thing about great 8bit music is how it sounds as if it’s about to fall to pieces. The first half of “Phantom Spikes The Punch” by Michigan-based Luminous Fridge sounds like three different video games vying for your attention in a dusty old arcade. There’s white noise from a dying speaker cabinet, the blippy melody of a nocturnal adventure, and the heavy beats of a first-person shooter. Together, they form an abstract sort of pop song, one barely holding onto its own self-containment. And then, as if with the flip of a switch, near the 45-second mark, everything shifts. The music gets markedly more contemporary, the beats and tune gathering themselves with a sense of lounge-ready decorum — less Pacman, more Amom Tobin.

The 8-bit charm of “Kvinnodan” by Alveola Ã„mting benefits from the sounds out of which it is constructed registering as household objects as much as they do as old-school side-scrolling fun and games. It isn’t just the gee-whillikers buzz of arcade activity, but also alarm-clock beeps and desk-bell rings. There isn’t a lot in the manner of development as it proceeds along its five-minute course, except that the beeping gets a little glitchy at times, its internal structure becoming slowly apparent as the beep is granulated into a series of component parts.

Alveola is based in HÃ¤rnösand, Sweden. Track originally posted for free download at soundcloud.com/alveola. Track found via a repost by soundcloud.com/super-miracle-dream-team.

Kind of Bloop: The Politics of Pixelizing

Why does altering a photograph differ from altering a song? Or does it?

The discussion that followed my recent post about the Kind of Bloop/Kind of Blue legal melee involved some questions, each politely put if strongly felt (exactly the sort of comments appreciated at this website), about why exactly it was that altering Miles Davis’ music seemed more egregious to some parties than did the alteration of Jay Maisel’s cover photograph. That is, why the holder of the copyright for Davis’ music deserved repayment, while perhaps the holder of the copyright for the photograph did not. I am, it feels at times, among those parties.

For background: Kind of Bloop is a remake of Miles Davis’ Kind of Blue album, with the original five jazz songs redone as “chiptune” music — that is, as music that sounds like it might emanate from a video arcade circa 1984. To complete the package, the original album’s cover art was processed to transform it to the blocky style called “pixel art.” The remake album was released in 2009, on the 50th anniversary of the original album’s release. In September 2010 Andy Baio, the creator of the Bloop project, agreed in an out-of-court settlement to pay $32,500 in fines to the photographer, the famed Jay Maisel, who had shot the iconic cover of the Blue album. Only in late June of this year did Baio go public with his legal entanglement.

At the risk of sounding like President Obama discussing gay marriage, I realized in the process of responding to these questions that my opinion on the subject of copyright regarding portrait photos versus music is still developing. Please understand that the logic I lay out below is at best exploratory. Partially it is exploring the issues at hand, and partially it is exploring my thoughts and thought process on the subject.

Though copyright protection has been repeatedly extended, it feels still like 50 years is a good long period of time to profit from anything before it becomes part of common vernacular, visual or otherwise. (And yes, feel free to ask me again when I am 75 and someone decides to make use of something I made when I was 25.)

No offense intended to photography, but framing a photo of a man as charismatic as Miles Davis seems like a far different proposition than composing original tunes such as those on Kind of Blue.

The musical notes in those pieces of music are Davis’ own, while the visual source material in Maisel’s photo is not his own.

Of course, this cuts both ways, which is where my still-developing status on the subject (aka wavering) comes in. (Wavering is when one considers flip-flopping to be a cognitive process.)

If you spend a lot of time listening to Kind of Blue, as with any music, great or not, you begin hear to the influences of others, some pronounced, some deeply seeded and coded. Rarely if ever are those influences repaid directly and financially for their effort.

One might say, by way of comparison, the subjects of photos by Jay Maisel and Annie Liebovitz do not profit financially from the ongoing sales of those works.

To acknowledge the way that prior work, that source material, figures in the development of music we habitually call “original” is to draw a comparison, rough as it may be, between the source of those melodies, and the subject in a photograph.

It is this very matter that is at the heart of remix debates following the birth of hip-hop. Hip-hop absorbs its influences in a more literal, fixed manner than did most of the music that preceded it, and it has literally paid the price for this, with the systematized legal process that was developed for clearing samples.

I’ve argued here that there may be a case to be made that portrait photography may not necessarily deserve the same degree of protection as musical composition. I’d also say that sound in general tends to play second fiddle, as it were, to visual images in culture, and that is because images are indelible in our minds in a way that music is not. And yet we protect certain visual images in different ways than we do others. Logos, graphic design elements, typography, photography, architecture: these are all handled differently by the courts.

In the end (to the extent there is an end, since as I said up above, I am still pondering the subject), I have no firsthand knowledge of why Andy Baio, the creator of the Kind of Bloop project, understood the need to pay the publishers of the music, and yet did not explore paying the photographer who shot the cover image. But I do have some sense of the disparity.

And the way it has all played out seems to be less a critique of Baio’s thinking process, and more a critique of just how broken our copyright system is, and of the financial threat that hovers over individuals who wish to take the culture around them and make something of it. As I’ve said before: the laws as they’re currently enforced protect the interests of companies (and individuals) who actively territorialize our memories and then charge us to access them.