This sneak peek of a forthcoming video game says a lot about generational iterations in digital entertainment and culture. In the game, Mimeo and the Kleptopus King, the player leaps between not only those standard signifiers of gaming progress in platformers (i.e., levels), but also between degrees of video-tech sophistication, from 2-bit through 16-bit, and potentially onward.

Generations of audio development are less easily trackable than those in gaming, which is more clear-cut in its platform-dependency, but I wonder if there’s a music out there that can not only glide as easily between worlds as this game does, but that does so with the sort of emotional meaning packed in here — retro Pong samples and off-the-rack vocoding do not count.

Up above are the hero at various bit levels — note that they’re not just the same drawing with higher levels of resolution. And here are two sample stages of the game, showing how color and shading are depicted: 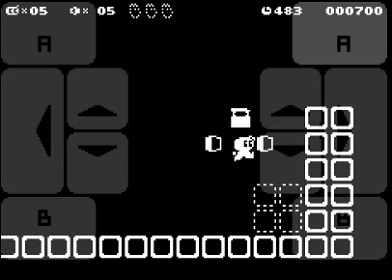 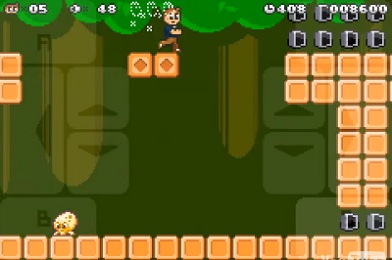 You need to watch the video below to appreciate the fluidity with which the game addresses these generations of technology. You aren’t just playing the same video game at with varying degrees of visual sophistication; certain moves require you to consider which bit level is the best way to proceed.

Original video post at vimeo.com. More on the development of Mimeo at the website of its creator, Shaun Inman, who also wrote the game’s music: shauninman.com (there’s an update explaining the development slowdown). Additional game footage at youtube.com/user/shauninman. Inman is also the developer of the game Horror Vacui (apple.com, creativeapplications.net).