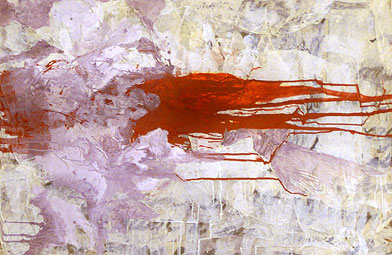 The first blast comes a few minutes in. Up until that moment, it’s all rough noise, certainly, but on a nanoscale, the rough noise of two dust mites going at it under your bed at 3am. Then comes this sharp, ragged, dastardly sound, like an unrequested wake-up call enacted vigorously with a torn paper bag — and from then on, all bets are off. There’s wild squiggles, and a thick white noise, and high-pitched tones to set off your inner canine, and an ever-present sense of warping that proves to be the work’s telltale component.

That warping is the sound of cassette-tape machines being artfully mangled (MP3). Occasionally there is the Chipmunks sound of a taped voice being played at a speed unintended by whoever first committed it to tape, squeaky-fast voices semi-buried amid all that chaos. This is “Cittacaura” by David Kirby, an Atlanta-based musician who runs the excellent netlabel, Homophoni, on which the track was recently released. “Cittacaura” is Kirby at work on his instrument of choice, a quartet of tape recorders, recording the material as he performed it, live, in early September in the confines of a studio.

More, including a recording of the track compressed in the “lossless” FLAC format, at the release page: homophoni.com.