The Fotofono studio space in Brooklyn, New York, recently posted three binaural recordings from a live performance by five accomplished electronic musicians. A lot of music can be labeled “for headphones only,” but nothing is as literally headphone-oriented as is a proper binaural recording. The process involves placing microphones in a way that mimics the placement of human ears, so that the resulting recording, when listened to through headphones, has a you-are-there, 360-degree feel. Such recordings are also, of course, entirely listenable to on a standard stereo system. 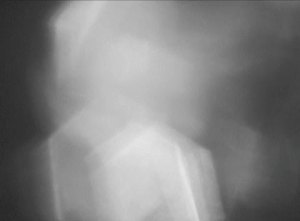 This concert featured Kamran Sadeghi and Bruce Tovsky, each playing solo, as well as the trio of Paul Devens, Richard Garet, and o.blaat (aka Keiko Uenishi). Tovksy improvised to live video manipulations by Shimpei Takeda, examples of which work (borrowed from the fotofono.net website) appear in this post post. 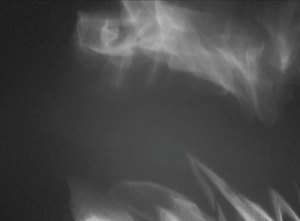 All three recordings take drones as their basis, the trio track in particular working in a variety of textural variations, including brief seizures of sound, and dense noise akin to mechanical growls (MP3). In Tovsky’s there’s this signature sound, like a metallic bird, that calls out during the piece, as well as a sharp, high-pitched sound, that occasionally slows itself enough to come into (sonic) view — there’s not only a musicality but a sense of narrative to the work, especially in its first half, that, as with the abbrasives in the trio piece, make this more than a drone, more than a rich blanket of sound (MP3). Sadeghi’s may be the most varied of the three — there are drones along the lines of an Indian raga, rough noises from what presumbaly were contact microphones, and expanses of lovely, synthesized minimalism (MP3).

Though we know each of the works was performed live (not just thanks to information in the blog entry that presents them, but from the evident crowd noise, camera sounds, and applause), what exactly was performed remains a bit of a mystery. The description is brief, leaving the pieces as sound-art versions of Plato’s cave — we hear the performance, but don’t see how it or what is being performed. Though the nature of this sort of listening is not a conscious act of spartan, new-critical curation on Fotofono’s part, the end result is mentally cleansing. It brings to mind tape-music concerts in which the lights are dimmed so as to diminish the impact of the absence of a performer.

One more comment about Fotofono. This is a unique source of Internet audio — it is neither a record label nor a netlabel, not an artist nor a publication. It’s a small, self-directed place that transcends its physical confines by making recordings of what happens there available far beyond its walls, an art bunker broadcasting cryptic messages into the night. That’s an exciting proposition.