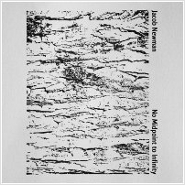 Website URLs are not unlike vanity license plates. You can tell a lot from how an individual chooses to label him- or herself. URLs do no have the attendant cheese factor of personalized license plates, because there are no non-vanity URLs; there is no “F38BC” nor “43HLJ2” of URLs. In the world of music, even those who park their recordings are communal hubs like bandcamp.com and soundcloud.com, those inheritors of MySpace’s music-sharing momentum, have to assign their account a name, whether it be their own, or an adopted one.

Jacob Newman makes his modest home on the web at capturedspace.org, and the phrase is an apt one for his sounds. As previously heard here last year in a collection of works based on the Buddha Machine (disquiet.com), the straightforwardly titled Buddha Machine, Newman has a penchant for meditative sounds that are magnificently still and contemplative. His No Midpoint to Infinity, which was released last November, doesn’t veer from that course. And as with Buddha Machine, Midpoint‘s conceptual core is a procedural one; it takes a single sound generator as its source, in this case a Fender Precision bass.

Though it’s exceedingly brief, the album’s open track (“Elusive,” MP3), at under a minute, may be its strongest moment — in retrospect, with knowledge of the bass, you can hear in it string-like features, such as plucking and slow strumming, but it’s more than anything a glorious shot of ambience, given depth with an echoing effect that suggests an impossibly large, and impossibly quiet, orchestra.

Full album at archive.org, where it is housed, and at the releasing netlabel, earthmantra.com.