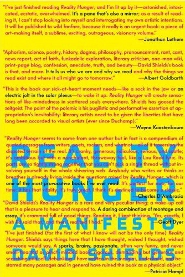 Reading the Wall Street Journal’s editorial page is a sure way to raise my blood pressure, but I don’t necessarily expect the same from its book reviews. In the February 22 edition of the newspaper, Sam Sacks (an editor at openlettersmonthly.com) weighed in on David Shields‘s latest effort in literary activism, the book Reality Hunger: A Manifesto (Knopf, 2010). The review is an almost entirely negative response that focuses on Shields’s book as seen mostly through the lens of writing, but Sacks’s apparent near-dismissal of the artistic value inherent in collage cuts too close to home for anyone who spends a lot of time listening to music that is largely comprised from pre-existing material. As he writes of Shields in his review at one point:

And while he also shows a playful awareness of John Barth and other forerunner advocates of experimental fiction, Mr. Shields’s proposed forms are best likened to the collages of Robert Rauschenberg (duly quoted in “Reality Hunger”), which mix self-portraiture, pages torn from books, defaced photographs and other “available material.”

Sacks takes issue with what he describes as Shields’s lack of interest in “any artifice that is not outspokenly aware of its artificiality.” Yet he fails to recognize the artificiality, let alone the humor, inherent in the book’s packaging, which wraps the cover in blurbs from various writers. Sacks seems to think he’s uncovered some sort of logrolling scandal (“Of the 14 blurbers, excerpts from work by fully half of them appear in the book itself, meaning that these esteemed authors are in effect heaping praise on themselves”), and in the process misses out on how the exaggerated presence of those blurbs on the cover is intended to draw attention to them — and to provide a model for what is inside.

Most prominent among the book’s blurbers is Jonathan Lethem, who produced an essay-length riff along the lines of Shields’s Reality Hunger back in the February 2007 issue of the magazine Harper’s. Titled “The Ecstasy of Influence,” it is built almost entirely from pre-existing text, yet reads as a fully formed work. Shields’s book, by contrast, is a string of loosely connected fragments, sort of like the book-length equivalent of a Tumblr blog.

There’s a telling video feature on Shields at the book’s Amazon page (amazon.com). In it, Shields references the poet Fernando Pessoa, which brings his artistic process full circle for this website, which is named for Pessoa’s The Book of Disquiet. But more of interest are these following two comments by him:

It’s an ars poetica for a burgeoning group of interrelated but unconnected artists who, living in an unbearably artificial world, are breaking ever larger chunks of quote reality into their work. I don’t feel any of the guilt normally attached to quote plagiarism, which seems to me organically connected to creativity itself. The history of art is the history of appropriation. All art is theft. And so much of the laws that we have now protect the lawyers and hamstring the artists.

I couldn’t help but hear — and, subsequently, after transcribing them, to then read — those uses of the word “quote” as an object of the sentences, rather than simply as verbal accentuation meant to highlight the words that immediately follow them, the spoken-punctuation equivalent to finger-quotes. For in Shields world, which is to say our own, “quote reality” is the reality that is constructed from pre-existing material. And “quote plagiarism” is the act of consciously utilizing chunks of material that already stand on their own, be they written phrases, or musical riffs, or image details.

It’s worth noting that those two chunks of what Shields says appear in immediate succession in the video, and when yoked together serve as a single statement, but they are clearly (at least in the video) sourced from different events.

Sacks’s review at wsj.com. More on Shields at davidshields.com. His book Remote (1996) was a prescient reflection on an information-mediated existence, published just before the Internet made that a widespread reality. Remote was published the year after B.W. Powe’s superb Outage: A Journey into Electric City, and I recommend reading them in tandem. Lethem’s essay “The Ecstasy of Influence” is at harpers.org.

Update March 16, 2010: In his Sunday New York Times Book Review essay on Shields’s Reality Hunger on March 14, Luc Sante has a very different take on the book than did the Wall Street Journal’s Sacks. In the piece, Sante weighs in quite favorably, makes note of the Lethem connection, and draws the comparison to the role of appropriation in music — going even a step further, to touch on the aesthetic value of the fissures inherent in sampling (electronic fans, note the use of the word “glitch”), rather than merely focusing on the collage-like aspect of art-by-accrual.

Here’s a key section of the review:

So what constitutes reality, then, as it affects culture? It can be as simple as a glitch, an interruption, a dropped beat, a foreign object that suddenly intrudes. Hence the potency of sampling in popular music, which forces open the space between the vocal and instrumental components. It is also a form of collage, which edits, alters and reapportions cultural commodities according to need or desire. Reality is a landscape that includes unreal features; being true to reality involves a certain amount of wavering between real and unreal. Likewise originality, if there can ever be any such thing, will inevitably entail a quantity of borrowing, conscious and otherwise.

Full review (“The Fiction of Memory”) at nytimes.com.