Quote of the Week: Gann on Cage’s Silence (First Impressions)

From the preface to Kyle Gann‘s new book, No Such Thing as Silence: John Cage’s 4’33” (Yale University Press), which I’m reading right now:

“I had to consciously remember that not every music lover out there has 4’33”, as I do, in his blood.” 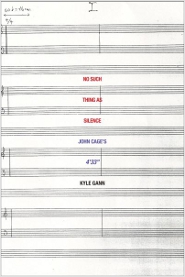 What’s striking about the book is that it is, indeed, written by a music lover, as Gann describes himself, even though that music lover is also an accomplished composer, a teacher, and most prominently, a music critic — perhaps as best known for his nearly 20 years as a critic for the Village Voice, and more recently for his blogging at artsjournal.com/postclassic. It’s arguable that for a generation of music listeners (and writers, and perhaps even composers), Gann has an influence somewhat along the lines of that which his former colleague, Robert Christgau, has on rockist critics. That comparison comes to mind because No Such Thing as Silence is, in many ways, a book about influence. Gann is quite open from the start about how Cage’s prominence in new music caused Gann to, in effect, listen elsewhere for a long time: to wrestle with lesser-known subjects, rather than to heap more meaning onto someone, something, that had long since been codified.

This slim book, though, results from his realization that even that which within a subculture might be understood as having certain inherent meaning, might to the broader culture be misunderstood — or, more dangerously, to have come to take on an entirely different meaning. In the case of Cage’s 4’33”, in which a pianist sits at a closed piano for that length of time, inviting the audience (forcing them, some might say) to pay attention to the sounds that would otherwise be considered the equivalent of a tabula rasa, it seems that Gann’s biggest concern is that it has come to be thought of by some as a prank.

And for anyone concerned that this excellent primer on Cage’s thinking might be too “academic,” too culturally remote, for general reading, just give a few moments to its preface, in which Gann affectionately recounts how he performed 4’33” as part of his high school piano recital back in 1973.