Images of the Week: Sound Art That Isn’t About Music

The work of Dominique Blais employs sound, but not merely as an end unto itself.

Much sound art is, ultimately, a form of music made physical, a kind of semi-permanent performance in the form of a sculpture or, more broadly defined, an installation. This is not the case for Blais. 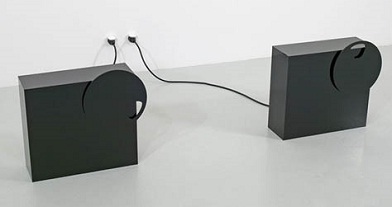 Take “The Orphaned Machines,” shown above. It serves as a kind of three-dimensional silhouette. It consists of two identical recording/playback devices. Their stark black form speaks of prototypes, yet their apparent functionality suggests the recent yet increasingly distant past: the analog, tactile use of tape. The two devices are plugged in, yes, but only to allow the reels to rotate. They are, by all reports, otherwise silent.

Unlike “Orphaned Machines,” it does emit sound, but only (according to the exhibit catalog) intermittently, when rotating parts come in occasional contact. Just like “Orphaned Machines,” it uses a stark black structure to reduce form to its bare essentials, but here that dark consistency serves a second purpose: it provides a backdrop against which the frayed copper wiring stands out. The loose wire brings an additional aura of threat — either because the exposed materials could spark, or because the wiring has visual similarities to an explosive device.

Both these pieces are currently on display at the gallery FDC Satellite in Brussels, Belgium. They’re part of a group show, also featuring work by Mira Sanders and Lisa Tan, which runs from March 12 through May 15 of this year.

Visit the gallery site at fdcsatellite.com. More on Blais at 75hertz.com/blais.