What We Talk About When We Talk About Cassette Culture: Great discussion going on at Rob Walker‘s murketing.com, where he summarized recent cassette culture, including a much-appreciated mention of my mention of Marc Fischer’s tape-loop gadget (disquiet.com). Also featured, this excellent tape dispenser, found via popgadget (not new, but still fetching): 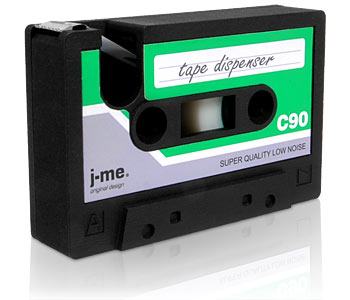 An Inventory of Domestic Listening: Speaking of Walker, he wrote an essay for the exhibit Rewind Remix Replay: Design, Music & Everyday Experience, currently at the Scottsdale Museum of Contemporary Art, where it runs through through May 23, 2010:

“Surely the first decade of the 21st century will be remembered as a pivotal time in the history of listening. But it won’t be because of a new genre that burst on the scene, the way rock, rap, punk, even disco, changed the music we listen to. It will be because of the objects and technologies that changed the way we listen.”

His essay takes the form of an “inventory of objects and devices for music-listening in my own home,” among them the Buddha Machine:

“The Buddha Machine is less a music player than a comment on objects that play music. Often called an anti-iPod for the almost absurd lack of choice it offers, it also references the transistor radio. Unremarkable now, the portable soundscape that those pocket-sized listening-objects offered must have been startling in its time: the music you want to hear, and that everyone around you must. Think of Humbert Humbert laying eyes on Lolita in the film version of Nabokov’s tale, in her bikini and heart-shaped sunglasses, with (literally) her theme oozing from her transistor, her insolence harmonizes with her brazen sex appeal.”

It’s in that essay that he wrote, “The poor old cassette ”“ cheap, plastic, fragile—enjoys none of the romance associated with vinyl culture,” which led to the above cassette-focused post. Exhibit essay at murketing.com. More on the exhibit at rewindremixreplay.org and smoca.org. Here’s one object from the exhibit, the Dynasty Discolite ES-555: 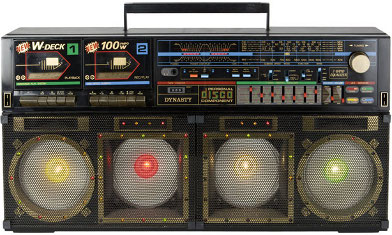 What Artists Do with Vinyl: Folks intrigued by the Scottsdale Remix exhibit will want to make it to the Nasher in Durham, North Carolina, come September, for The Record: Contemporary Art and Vinyl, which opens September 2 and closed February 6, 2011. It’s described as “the first museum exhibition to explore the culture of vinyl records within the history of contemporary art.” Partial list of artists includes Laurie Anderson, David Byrne, Jasper Johns, Christian Marclay, Mingering Mike, Dave Muller, Robin Rhode, and Carrie Mae Weems. Here’s Rhode’s “Wheel of Steel” (2006): 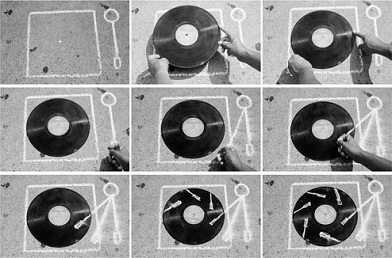 More at nasher.duke.edu/therecord. (It’s funny, the last time I was at the ICA in Boston, there were pieces by both Rhode and Muller, but they were in separate galleries.)

The Most Portable Record Player Ever: Speaking of innovative uses of vinyl, this comes via (among numerous other places) vinylathletes.com. It’s a self-contained, manually operated record player, from the sound design/production group GGRP (ggrp.com). (Update March 25, 2010: Additional information on the historical provenance of this idea, via Steve Roden’s inbetweennoise.blogspot.com: disquiet.com.) 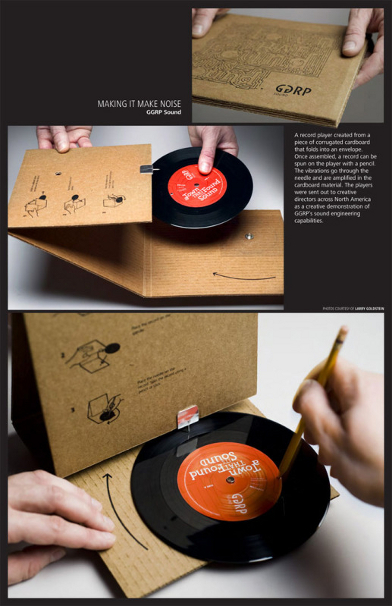 The 20-Drawer Motet: Janet Cardiff and George Bures Miller, famed for the great “40-Part Motet,” have a new exhibit up at the gallery Luhring Augustine in Manhattan. The main feature is a new work, “The Carnie”: “A small children’s carousel is activated by a start button. It grinds slowly up to speed, while lights and music emanate from the structure and moving shadows are cast onto the walls.” Also featured, as shown here, “The Cabinet of Curiousness,” a re-purposed chest with 20 drawers: 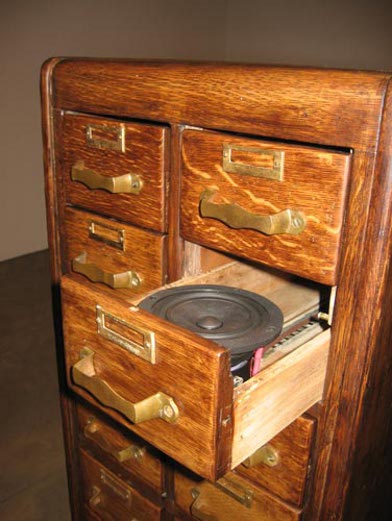 “Functioning as an interactive piece, the opening of each drawer activates a voice or piece of music from within the cabinet. The audience, assuming the role of a DJ, may experience the clarity of sound from one drawer or a cacophony of sounds from numerous drawers opened simultaneously as the cabinet is played like an instrument. A contrast emerges between the obsolete system of cataloguing single pieces of data and our current tendency to inundate ourselves with excessive information.”

A Glint of Luminale 2010: The 2010 edition of the Luminale festival this April will feature work by, among others, Dienststelle (aka Karl Kliem), whose six-speaker surround-sound “Hafen 2” synchronizes music and fluorescent bulbs. Details at dienststelle.de and luminapolis.com.

More on Another Green World: Of the dozen-plus entries in the 33 1/3 series of album-specific books, Geeta Dayal‘s recent one on Brian Eno‘s Another Green World is easily, at just over 100 pages, among the most brief, which is unfortunate, but the publicity for the book has given her an opportunity to expand on her thinking, including a two-part series of conversations with her former teacher, the always broad-minded and curious Henry Jenkins: henryjenkins.org, henryjenkins.org.

Listen to the Trees: The sound of the vascular systems of thirty trees: boingboing.net (thanks for the tip, Molly Sheridan, of artsjournal.com/gap). By field-recording legend Bernie Krause.

The Guggenheim Has a Ball: The Guggenheim invited numerous artists to re-imagine the famous rotunda (details at guggenheim.org). This is Christian Marclay‘s: 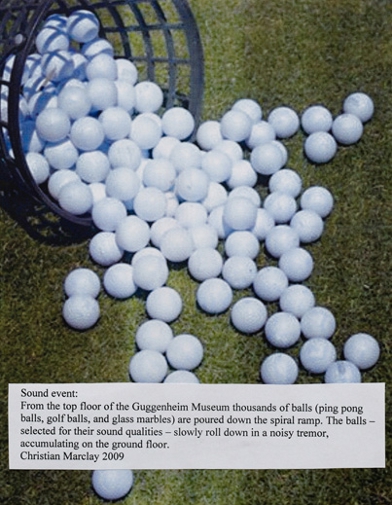 Tuning Pratt’s Physical Plant: Geoff Manaugh over at bldgblog.blogspot.com visits the school’s steam infrastructure as it is transformed, each year, into a musical instrument.

The Anechoic Automobile: Nick Seaver over at noiseforairports.com notes this silent-themed ad campaign from Acura: 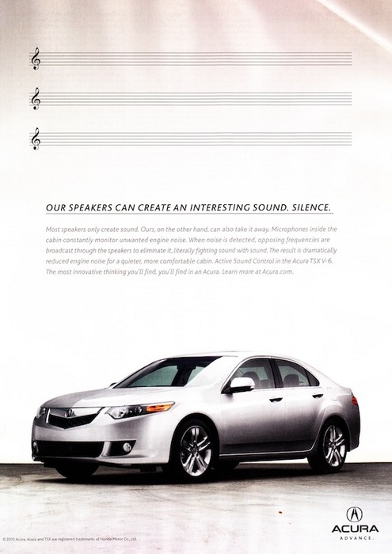 London’s Alright if You Like Exposed Speakers: Frieze.com‘s Frances Morgan on the Florian Hecker exhibit at Chisenhale (chisenhale.org.uk) in London through March 28:

“2 x 3 Kanal (2009) is exhibition’s centrepiece, both literally — three outward-facing speakers are suspended from the middle of the ceiling — and in the success with which it brings together the concerns that are raised by the other works. The 19-minute work feels unlike an experiment or the exposition of a single idea: it is very much a composition. The synthesis of the means of transmission — the two three-channel pieces are played between the three speakers, rotating in different directions — and audio content feels perfectly realized, and visitors appear to fully inhabit the work, forming circles around the speakers, or moving to their own interior logic towards and away from the sound.”

Artforum.com has more details, from when the work was at Bawag Contemporary in Vienna late last year (bawagcontemporary.at). One image of the expressly stark show: 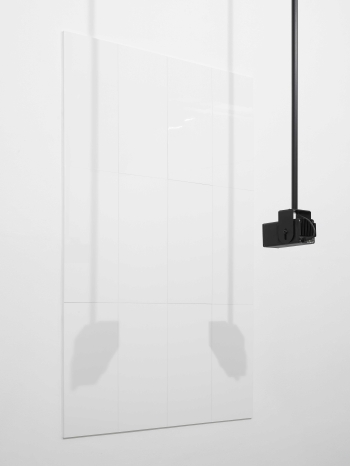 Shoe Horn: A friend posted this query recently, wondering what brand of shoes this logo is for. The logo looks like a visual depiction of sound emanating from a single source, as from a radio tower — it also vaguely resembles a megaphone. Any idea what brand it is? Sneaker culture is, generally speaking, afield from this site, but the sonic imagery makes it of interest.