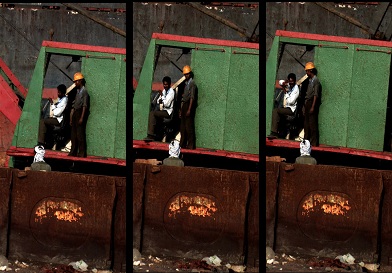 The gentle, childrens-toy sing-song melody that runs through “Glass Marimba / Frog Caller” by Stephen Vitiello has a lullaby vibe, so to speak, even if it’s ever rubbing up against a frog caller, one of those rough wooden instruments that simulates the throaty gargle of its namesake amphibian.

The two instrumental lines are never fully aligned, and that adds to the contrast in melody and texture. It also allows each to highlight the corresponding aspects of its counterpart — the caller bringing out the hard consonance hidden at the heart of the marimba, and the marimba getting the listener’s ear to pay attention to the taut but not non-existent range of the caller.

The music serves as the score to an installation by video artist Pawel Wojtasik, with whom Vitiello has collaborated on several occasions. The piece, titled “At the Still Point,” is currently at the gallery Smack Mellon in Brooklyn (smackmellon.org), where it runs through April 11. A still from the video appears at the top of this post.

Via email, Vitiello explained a bit more about the video, and the sound sources with which he constructed its score:

“It was shot in India. The glass marimba is this instrument built by the Brazilian group Uakti. They make all their own instruments. It’s made from two wooden frames (resonator boxes) and pieces of window glass, which are cut to size, so they’re in the correct pitches. Eder Santos, Brazilian videomaker and friend, asked them to make one for me many years ago instead of paying me for a soundtrack. The frog caller is something they used in the making of the sound design for District 9 and I thought to get one and play with.”