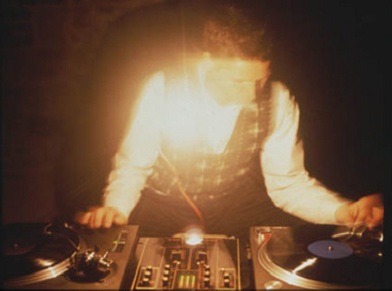 Achim Mohné‘s new podcast isn’t particularly new. It was recorded in July 2000 at the Museum Ludwig in Cologne. But it sounds as fresh as a new layer of dust, and just as delicate.

To hear the piece in 2010 for the first time is as if a room had been left undisturbed for a decade — or, given the title of Mohné’s piece, “Aufzeichnungen im Kellerloch (Recordings in the Cellar),” not a room but a cellar.

This is music to listen to while reading Caleb Kelly’s recent MIT Press book, Cracked Media, a scholarly survey of music (and related enterprises) made from the broken bits and threadbare sounds and technical errors that either symbolize or actually result from, as Kelly puts it in the book’s subtitle, “malfunction.” (The book’s full subtitle is “The Sound of Malfunction.”) Mohné doesn’t figure in Kelly’s book, but fans of those musicians, acts, and artists who do — Oval, whose stuttered techno helped define the word “glitch”; Christian Marclay, one of the first to see the vinyl record as the foundation of artistic practice; and Nam June Paik and John Cage, among the earliest to recognize the beauty in static (television and radio) — will immediately appreciate the manner in which such a super-quiet recording can nonetheless be so intrinsically compelling.

The Mohné piece (MP3) was posted recently as the 50th entry by touchradio.org.uk, the podcast-series spinoff from the Touch record label. Very few details are provided on the TouchRadio page dedicated to the MP3 (not much more than performer, title, date, location), but over at Mohné’s website, achimmohne.de, there’s plenty of information about the July 2000 performance. The music was performed on a pair of turntables, on which he manipulated the locked grooves at the end of vinyl LPs. It opens with a thud on slow repeat, like a mechanical heart beat, the groove coming around and around as an LP rotates. In time, it gets rich with static: the fine sound of particulates.

The sound doesn’t merely resemble dust particles; it served as the score to a projection of illuminated dust. Mohné describes the projection system as follows:

Dust, collecting in the light beam of a film projector, is being recorded by a video camera. The light beam is being absorbed by a velvet “light bag”, therefore the projection itself is invisible. The video camera is connected to a video beamer, which projects “dancing dust” (real-time and extremely enlarged). The more people enter the installation space,the more dust gets moved around, the more intense “the flight through space” is.

This is the set-up (projector on the right, “light bag” on the left): 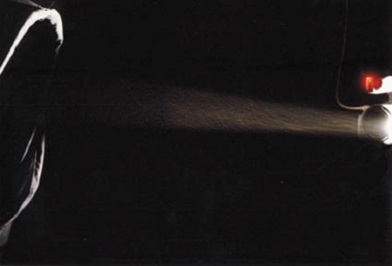 And these are images of the projected dust: 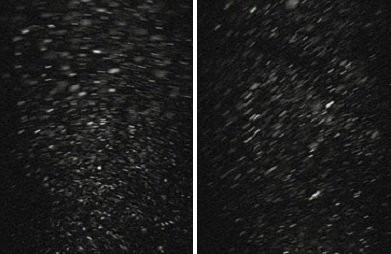 As Mohné notes, the parallel between the images of dust and the sound of the grooves is not just about delicacy and fragility. It is also a practical matter:

The “ending grooves” sound very different, depending on how dust has effected and transformed the soft surface of the vinyl.

In addition to this information, Mohné’s site, achimmohne.de, includes a downloadable catalog of his Ludwig show (albeit only in German) and a low-resolution video of his performance.

One side note: The TouchRadio podcast has an interesting lag. It’s not uncommon for the audio to pop up in the service’s feed (RSS) in advance of when the framing descriptive content is posted to its website. As a result, subscribers to the feed get access to the audio before they’re entirely clear what, exactly, they are listening to. This isn’t an intentional act of new-critical focus, nor is it an occasion of art-prank obfuscation, on the part of Touch, but it does provide a nice opportunity to focus on the music before the facts come into view. (I noted this production time lag via twitter.com/disquiet on April 1, and in retrospect I realize I should have noted that it was no joke.)