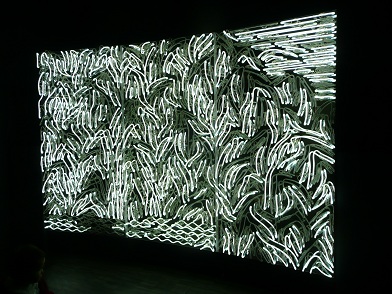 From state-sponsored propaganda posters featuring broad-shouldered exemplars of the People to mid-century paintings that dare to embrace European techniques, from ceiling-high scrolls that hide human details in the plain sight of nature worship to contemporary films that comment on the realities of life in a rapidly metastasizing empire, the Shanghai exhibit currently occupying the main floor of the San Francisco Asian Art Museum displays a wildly broad array of Chinese art.

This includes a floor-spanning installation as well as restored footage of early cinema. There are images of life in the streets and harbors of the exhibit’s namesake city going back at least a century and a half, and brand new (well, dated 2009) pop art that mashes up such distinctly Western figures as cigarette mascot Joe Camel and film legend Marlene Dietrich.

And then in one dark corner, there is “Landscape — Commemorating Huang Binhong — Scroll“ (2007) by Shen Fan (ç”å‡¡). The choice of location isn’t neglectfully dark, but purposefully so, thus letting the piece’s light maximize its impact. The work (pictured up top) is a massive, free-standing wall of neon, comprised of small pieces, each one a little curlicue, all of them fitting together in a manner that suggests brushstrokes, jigsaw-puzzle pieces, and loose foliage. The illumination is enhanced by a reflective backing material, which gives each piece of neon the effect that it is hanging in air. The complexity of the overall pattern masks the electrical infrastructure. Unless you really focus on a specific spot in the work, you don’t see the un-illuminated wiring and tubing that makes it all possible. Here’s a detail from the above photo: 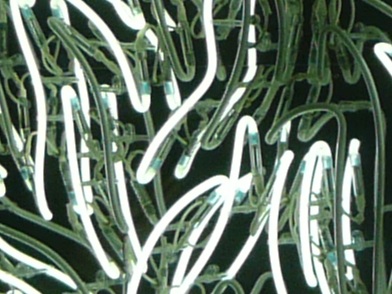 The artist has reportedly said that the choice to employ neon was inspired by the geographic setting for the piece’s debut — it was featured at the 2006 Shanghai Biennial, which took place in a neighborhood famed for its neon. It’s unlikely, though, that the blinking lights of that urban territory were as sonorous as Shen Fan’s “Scroll.”For each time one of those little snippets of neon flicker on or off, a single note of a qin, or zither, resounds. According to the wall text at the Asian Art Museum exhibit, “The length, shape, angle, and location of the neon tubes decide the length and tone of the musical notes.”

That correlation isn’t so causal that the piece in any way seems predictable. It’s more playful than anything, as every 30 seconds or so a new piece of neon turns on, and another qin note is played. The pacing has a considered sensibility, like a ritual, a playful ritual. Shen Fan’s “Scroll”is a self-contained spectacle that makes you loiter and pay attention, waiting expectantly for the next tone to sound, for the next neon tube to flicker into view.

The piece appears in what a gallery map lists as the tail end of the “Revolution” section of the exhibit — you can hear the qin through partial walls while you look at darkly humorous political cartoons and a portrait of Chairman Mao that makes him resemble a Chinese version of Mister Rodgers. But by materials, artistic tradition, and chronology, it really helps constitute the “Today” section of Shanghai, the section that focuses on emerging art.

Here’s another image of the piece, from the selected items highlighted in the museum website’s online tour of the show: 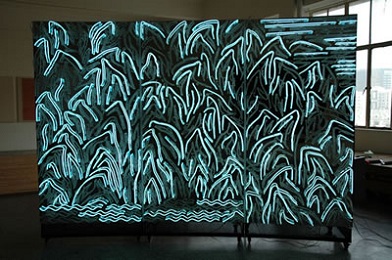 More on the Shanghai exhibit, which runs through September 5 in San Francisco, at asianart.org.