Ian Johnson at the Start of the Rainbow

Most drawings and paintings of legendary musicians, as with those of other public figures, are based on photographs. Whether you’re in an art gallery perusing graffiti-inspired pictures of Charles Mingus and John Coltrane, or down in Tourist Town surrounded by secular iconography of Marilyn Monroe and James Dean, there’s usually a photographic foundation to the image you’re looking at.

These drawings-from-photos generally aren’t examples of photo-realism. They’re something quite different: the practice of producing from photographs new images that suggest themselves to be fully original portraits (or, in another context, still-lifes). Photo-realism is about reconciling the pre-photographic traditional of painting with the documentary capacity inherent in photography. This other mode is about instilling photographic documentation with the expressionistic artistry of painting. The best of such photo-derived drawn and painted images transform the original photos into something that speaks to the artist’s own perspective. Individually they may “transcend” the source material, but that’s a broad term that suggests no single approach.

The end result is a kind of visual remix, the original photo an example of image-as-sample. These matters of artistic appropriation are particularly resonant in images that depict musicians, such as those by illustrator and painter Ian Johnson, whose dedication to his subject matter is apparent in numerous ways.

Here, to provide one example of his work, is his drawing of trumpeter Don Cherry and bassist Henry Grimes: 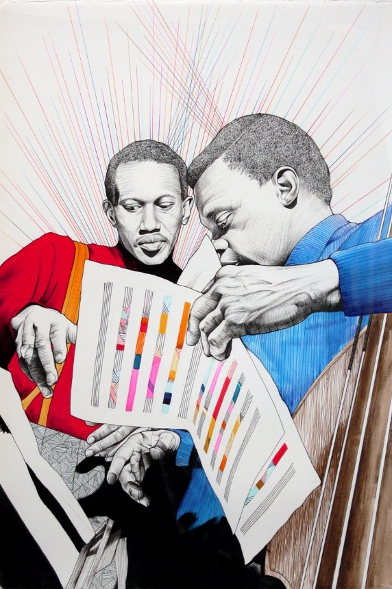 Johnson has a solo show currently up at the gallery/store Park Life in San Francisco, titled Of the Living Sky. It opened April 2. The show features two dozen drawings by Johnson of jazz legends, including the one of Cherry and Grimes, plus a sculpture (more on that later). There aren’t just the standard figures, like Miles Davis and Thelonious Monk, but relative (if nonetheless highly accomplished) outsiders, such as the Art Ensemble of Chicago, the Jazz Composers Guild (great to see a young John Tchicai smiling proudly), and the avant-garde clarinetist and saxophonist Anthony Braxton, who is featured in not one but two drawings.

One marker of Johnson’s achievement is that the lesser-known figures are no less resolutely drawn than are the commonly recognizable ones. The firm, thin line with which he gives shape to the aged beauty of Chet Baker’s grizzled face is no less assertive, no less precise, than the line that traces the contours of saxophonist John Gilmore, shown standing in one picture next to storied bandleader Sun Ra. (The Park Life exhibit’s title is a nod to the Sun Ra track “Portrait of the Living Sky” — kudos to Johnson, or whoever named the show, to have thought to remove the word “portrait.” The Gilmore/Ra picture is on the exhibit’s promotional postcard.)

The source images may be familiar. In many cases, they appear in the very first page of a Google Image Search for a given artist — that’s the situation with Cherry/Grimes, shown in this photo, which clearly served as the template for Johnson’s drawing: 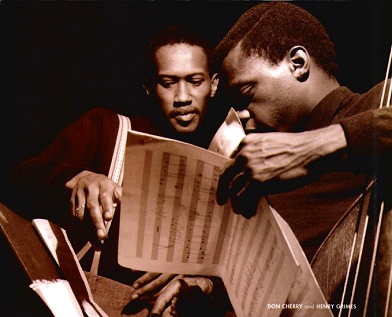 But no matter their provenance, all 24 portraits are part of a single, whole catalog — Johnson’s catalog, Johnson’s vision.

In addition to that firm line, Johnson introduces a prismatic color effect to almost all of this work. Bringing color to these images is a complicated affair, since so many of the original photos were taken, or at least broadly reproduced, in black and white. In most cases, the major figure in an image is shown as the originating source of a kind of radial halo of colored lines; the symbolism is part holy, part musical, though for Johnson those two may be one and the same. These prisms appear as hard, stiff, geometrically certain vectors. 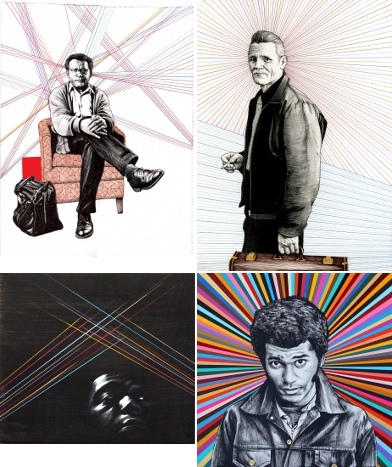 Note not only the consistent use of these colored lines, but the potential they have to suggest an editorial voice on Johnson’s part. Do the lines that intersect above Parker’s head suggest some higher purpose for the undisputed legend? Do the crisscross ones around the elder Braxton speak to the increasingly experimental nature of his vast output, in contrast with the calm, rich colors and pattern of his youth? Could the tragic figure that is Baker be placed in a manner that any more clearly telegraphed his martyr-like status? 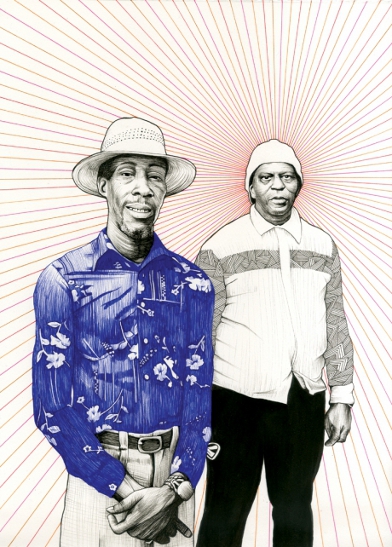 The effect throughout is beatific, even if it can’t help but imply a hierarchy. For example, in the image of John Gilmore and Sun Ra (shown directly above), the lines clearly are centered solely around the latter, even though he stands in the background. In the image of Don Cherry and Henry Grimes, the majority of the lines emanate from Cherry, but some shoot out of Grimes, too — and the places where the lines intersect serve as a testament to their collaboration. These lines are as intrinsic to Johnson’s approach as they were to the late minimalist Agnes Martin’s, though of course with a very different impact.

All of which (sampling, symbolism, minimalism) leads back to the image of Cherry and Grimes, and to this detail of that image: 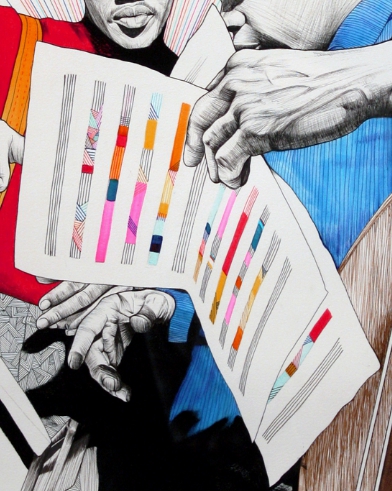 In the photograph that served as the source for the picture, Grimes is shown holding a piece of sheet music, dotted with notes. In Johnson’s transformation, the musical staff lines remain, but the notes have been replaced with all manner of colors and patterns, a synaesthesia that willfully confuses image and music. It’s a kind of jazz Fantasia. This is simply Johnson at his best — filling these once static images with the vibrancy of their subjects. It probably isn’t lost on him that the score he has created in the Cherry/Grimes picture looks very much like the sort of graphic composition that Anthony Braxton helped instigate.

This idea of music as color, notes as lines, prisms as symbols of all that is holy, if not sacred, finally escapes direct association with any particular musician in “No. 3,” a sculpture that one could easily miss if one doesn’t look up. It appears at Park Life above a pipe near the gallery’s ceiling, long poles painted in Johnson’s rainbow palette, each color splayed across the wall where an individual pole ends. Johnson thus treats his audience like he does Charlie Parker, making the music something to aspire to, whether we create it, listen to it, or pay tribute to it. That sculpture is the “living sky” of the show’s title: 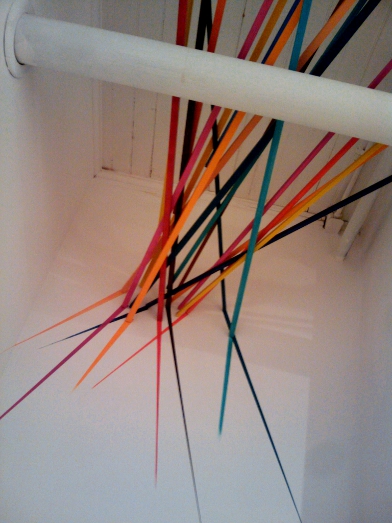 More on Johnson at ianmjohnson.com. A monograph on him, Beauty Is a Rare Thing, has been published by paper-museum.net, a project of Park Life. More on the Park Life gallery, which frequently has music-themed shows, at parklifestore.com/gallery.