This is not Chris Ware’s rejected cover for the next issue of The Journal of Music Theory, nor is it a Christoph Niemann editorial illustration for music issue of the New York Times Book Review: 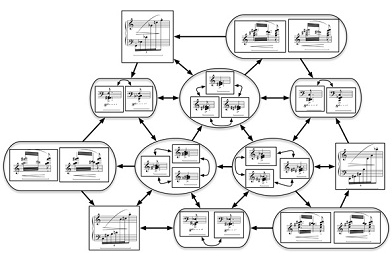 What it is is a diagram of “Piano Etudes” by composer-technologist Jason Freeman. Here’s a detail, for closer inspection: 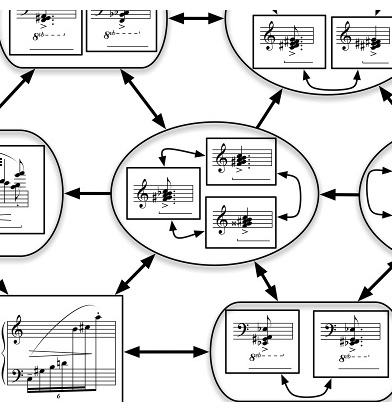 Freeman writes about the project at opinionator.blogs.nytimes.com. He’s created a piece of music that is, more factually, pieces of music — pieces intended to be organized in any manner by anyone. There are four of these etudes, each consisting of multiple fragments of piano recordings. The approach to composition can be traced back to the “open score” mode of composers such as Terry Riley and Earle Brown, as Freeman explains. He has taken that approach and upgraded it for the Network Era, with the help of Akito Van Troyer:

In “Piano Etudes”(2009), I use technology to make the open score accessible not only to performers but also to audiences, inviting everyone to experience and participate in the work’s creative process. I notated these four short piano pieces as sets of musical fragments connected by arrows. The structure is reminiscent of a choose-your-own-adventure novel, of a flow chart, or of the hyperlinked structure of the Internet. Each version of the piece simply follows the arrows to create a unique path through the score. There are an almost infinite number of possible versions.

You can make your own version of any of the four etudes at turbulence.org. The project also brings to mind the instructional scores of artists and musicians involved in Fluxus, and confirms that there is a direct lineage from the instructions-as-score of John Cage, Yoko Ono, and others, and the code-as-score of people like Freeman.

Disquiet.com readers with long memories will recall Freeman’s “Shakespeare Cuisinart,” which I wrote about back in July 2001: disquiet.com.

More on Freeman at jasonfreeman.net.

Thanks to Mike Rhode (of comicsdc.blogspot.com) for the tip.