The Internet allows for varieties of atemporality, some of them semi-intended consequences (such as the manner in which Jorge Luis Borges’ Infinite Library seems within reach thanks to vast databases of culture), many of them unintended (for example how glitchy technology can summon of items from the past with no clear curatorial intention).

Speaking of the latter, neither Google Reader, the popular browser-based RSS-subscription software, nor the RSS implementation of the podcast produced by the Museum of Modern Art in New York are perfect software. Sometimes in Google Reader, a feed’s entire past entries, or some subset thereof, will pop up as if brand new. And for whatever reason (certainly not necessity), MoMA’s podcast feed often neglects to provide direct links to contextual URLs associated with the MP3s that it serves up. (This issue isn’t unique to MoMa, though given the museum’s stature, it’s a bit disconcerting.) 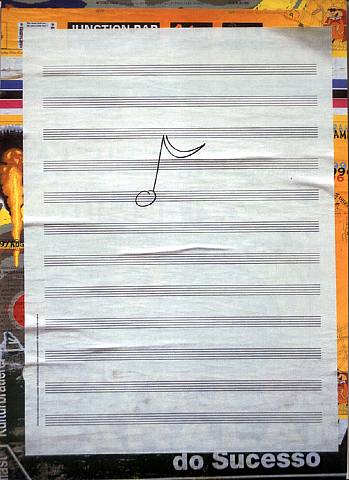 Thus this past week, a 2006 recording of Christian Marclay‘s “Graffiti Composition” appeared amid a variety of other MoMA podcast entries, mostly lectures, though there was a Dadaist sound-poetry event in there. Performing Marclay’s work was a quintet of accomplished guitarists: Melvin Gibbs, Mary Halvorson, Lee Ranaldo, Vernon Reid, and Elliott Sharp, who also served as musical director (MP3).

The composition dates from two decades earlier, back in 1996, when Marclay was invited to a festival in Berlin. He was present at the MoMA event, and recounted how the work was produced:

“I had 5000 posters, these blank oversized music sheets, plastered all over the city of Berlin for the duration of the festival, which was a month. Every other night a crew went out and plastered more posters. I didn’t know what would happen, and documented the process. Interestingly enough, a lot of people left traces on these posters. And a lot of people actually left musical notations.”

He later selected 150 exemplary cards, and the set was published in 2002 by the Paula Cooper Gallery. Two dozen of those cards served as Sharp’s score for this performance, a wildly rangy affair in which all manner of guitar techniques, most of them focused on noisy minutiae and improvised contrapuntal play, are called upon.

Marclay added, in his introduction to the night’s event, that he feels uncomfortable being considered the work’s composer, calling himself instead as the facilitator. In other words, the word “graffiti” in the title of the piece isn’t just a statement of process but of provenance; the graffiti, the world, is the composer, and Marclay’s cards — one of which is shown above — are recordings of activity, some willful, some chance, all framed by Marclay’s conceit. While a lot of people did scrawl notes on the paper, some of the cards feature subsequently superimposed posters, or writing more generally recognized as graffiti, or the rips and abuse of daily wear.

With a little sleuthing, this contextual URL was located: moma.org. (Above image from the Paula Cooper collection, borrowed from artnet.com.)