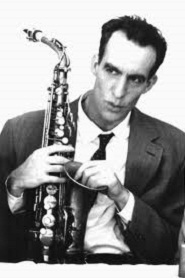 Addendum: I’ve learned about a Change.org campaign to ask the New Yorker to remove the original article, which Rick Moody has helped debunk. The campaign is here.

Addendum: Since initially writing up this mention of the New Yorker article, I have been reflecting on Lurie, his music and art, and the situation in which he finds himself — a situation exacerbated by having become, as a result of the New Yorker story’s publication, the subject of increased public discussion. I want to be very clear about a few things:

First, this summary of the New Yorker article is just that, a summary of an article. I had no knowledge of the facts of the situation myself — in fact, I knew nothing of the circumstances at all until I read the article when it first appeared online. The New Yorker article puts forth suggestions, such as the author’s depiction of (notably) anonymous friends of Lurie attributing to him a certain amount of paranoia; this isn’t my perception of John Lurie himself — it is my reading of the article’s depiction. More recently, Lurie has been interviewed by jambands.com, and he talks about the New Yorker piece, and where he’s at. The purpose of the summary I wrote was to set context for my primary interest, which is the touching sentiment in the example of acoustemology at the very end of the New Yorker piece.

Second, I increasingly feel that the means by which I paraphrased the article don’t align in any meaningful way with the affection I have for Lurie’s work. To say that I had a European subway poster for Stranger Than Paradise above my bed for approximately a decade after college, or that one of the highlights of my early work as a professional music critic involved interviewing Lurie about his score for that film, doesn’t begin to do justice to how much his conception of jazz, and his approach to composition and performance, have fed my ears and my thoughts for more than a quarter of a century.

Third, I am worried about Lurie, and want nothing more than for him to be able to put all of this behind him. I spent much of my early 20s watching him on the stage of the (Houston Street) Knitting Factory, and at the Puck Building, and want to imagine him in whatever the early-21st-century version of those places is (well, preferably a step up from those places). I want him to be able to reconnect with the considerable audience whose admiration he should be able to enjoy comfortably.

The recent feature story on John Lurie published in the New Yorker (“Sleeping with Weapons,” newyorker.com) reads like the plot to what could be a recent-vintage Paul Auster novel.

It’s the tale of an aging Manhattanite artist who retreats to the desert, fleeing perceived fears. He is as vain as he is talented, and as paranoid as he is vain, and readers don’t take long to recognize that the true enemy is inescapable: himself.

Lurie (pictured above, from his thrift-store-suit heyday), the once and (one hopes, despite the dire tenor of the story, which appears to portray a highly sensitive and less-than-stable individual) future Lounge Lizards jazz saxophonist and band leader, currently hides in plain sight in Palm Springs. What he’s hiding from is a friend back in Manhattan whom he considers a threat to his life.

According to the story, written by Tad Friend, these are among the things we know about Lurie: he only recently started playing saxophone again, for the first time since 2001; he has been suffering from various physical maladies, some of which may not exist; he sleeps with a machete under his bed (along with pepper spray and a “ninja baton”); he is that rare individual who hires a personal assistant who does not know how to drive.

That assistant, a Turkish woman, brings to mind the dutiful, bewildered, and self-composed Hungarian cousin from Jim Jarmusch‘s Stranger Than Paradise, the 1984 film that put Lurie’s face on the cultural map. While there is a particular individual whom Lurie fears enough to have left New York, he shares in the article various other personal antagonisms, including one involving Jarmusch: “When ‘Stranger’ came out,” he says, “I became this guy Jim discovered, this dumb Kiefer Sutherland guy.” The complaint seems odd, since Lurie went on to work with Jarmusch again, and because as the composer of the score to Stranger Than Paradise — a spare string quartet that is one of his great musical accomplishments — Lurie certainly was not easily mistakable for the character he portrays in the film. (Also, in 1984 Sutherland was at just the start of his career, and had filmed nothing of any consequence. This means that even if the complaint isn’t recent, its depiction is.)

In any case, at the very end of the New Yorker piece, Lurie says the following:

“There’s a spot on Astor Place, near where the cube is, between Broadway and Lafayette — a saxophone sounds incredible there at about six o’clock.”

His appreciation of Manhattan is a very specific one. He comes from an era when life only happened below 14th Street, and that remains very much his mindset. His understanding of this aural space, of those acoustic properties, exemplifies the idea of “acoustemology,” which Steven Feld has defined as “local conditions of acoustic sensation, knowledge, and imagination embodied in the culturally particular sense of place.”What’s striking is that when Lurie speaks of missing New York, of the life he left behind, what he focuses on isn’t just the place, but the sonic particulars of that place.

What he’s describing is a deeper understanding of sonic life. When people speak of the sounds of a given place, they’re often describing the sounds they hear: the street cars of New Orleans, the taxi cabs of New York, the calls-to-prayer of Mecca, the surf of Big Sur, the bells of London.

What Lurie describes, however, is a place’s capacity for — its potential for — sound, the way the physical environment shapes sound. And aside from mentions of his flourishing art career, it’s arguably the only hopeful moment in the entire story.