The latest in the Touch Radio podcast series is a live-in-studio recording by guitar-enabled electronicist, or electronics-enabled guitarist, Oren Ambarchi. 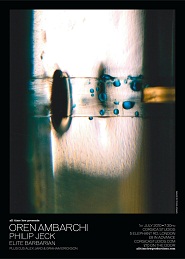 Very little information about the performance is provided, a common situation at Touch Radio, which in many cases tends to a new-critical approach — that would be one in which the work is heard free of context (this is not exclusively the case at Touch Radio, and when there is context, it’s often provided by visuals, usually related photographs). The website, at touchradio.org.uk, simply reports the length of the Ambarchi MP3 file (25:29) and its size (192 kbps), and the following: “Recorded from the desk, live at Corsica Studios, London, on 1st July 2010. With thanks to Tom Relleen.” A title is provided, Live at Corsica Studios, and the date of the podcast’s release, September 3, 2010. Over at orenambarchi.com, a little more info is offered, including this: “His concert at Corsica Studios on 1st July 2010 was recorded straight from the mixing desk and has been unedited.” A search for “ambarchi” on the website of the London-based Corsica (corsicastudios.com) yields a null result.

Which leaves the listener blissfully clueless, entering into the almost half-hour recording as if it were a dark room, unsure of what will occur. What does occur is a slowly enveloping guitar feedback performance, moving from quietude to roiling waveform. It’s a drone version of the classic “whisper to a scream” mode. At times it sounds a bit as if T. Rex’s classic blues-raga-rock were being dissected by Sonic Youth’s Lee Renaldo, at others like short-wave radio communication in some arcane, unbroken code.

The image of the concert poster shown above is taken from the touchmusic.org.uk website, which shows that Amarchi was not alone on the bill, which also featured Philip Jeck, Elite Barbarian, and DJs Graham Erickson and Alex Jako.