Kudos to Ethan Hein for an impressive act of hip-hop forensics and sampling genealogy. His excavation of DJ Premier‘s production of Nas‘ song “Nas Is Like” includes this handy flowchart of all the constituent samples: 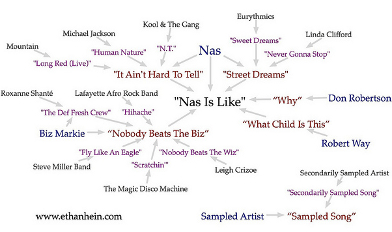 Many of those samples, as Hein notes, had appeared in earlier Nas songs — this includes samples of Nas’ own voice — which makes Premier’s production a meta-level project, and confirms why his name is uttered alongside not only the Bomb Squad but also the likes of Teo Macero and Bill Laswell.

As Heim puts it,

Any sample-based song carries a dense web of associations, and I love the complexity that gets introduced when people sample themselves, or when they sample tracks containing samples, or best of all, both. ‘Nas Is Like’ has a complex family tree, a set of allusions to allusions to allusions. This is as it should be. Fundamentally, all music is built of reshuffled bits of other music. Hip-hop makes this fact an explicit part of the music’s message, and that’s the biggest reason why I love it.

Heim collects all his “sample maps” at flickr.com. While many have to deal with the “sample and sampled” nature of the Nas piece, some map out from ur-texts like Led Zeppelin’s “When the Levee Breaks”: 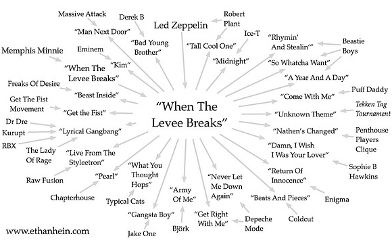 And other Hein maps track various samples employed by a single musician, in the following case the rapper Common. Writes Hein in the caption for this photo on Flickr, “There are a lot of Kanye West productions here, which means a lot of samples. The map is nowhere near exhaustive for reasons of space, I limited it to songs using more than one sample”: 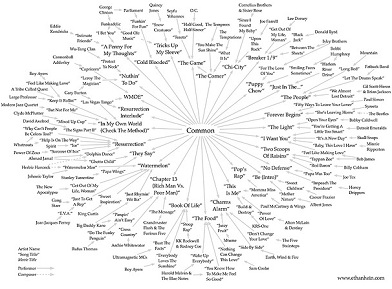 There are numerous resources for sampling information, notably the song-specific pages at wikipedia.org (click through for a more prosaic description of “Nas Is Like”), the rap-oriented whosampled.com, the more broadly defined secondhandsongs.com, which calls itself a “cover songs database,” and the-breaks.com. But none of that crowd-accrued data has the gravity of Hein’s post (which, of course, draws from those sources as raw material); his effort includes audio and video of various parts of the song, and commentary about the structure of the piece, as well as the nature of hip-hop and, more broadly, composition. As he writes in a related post, “What works the best in music, as in biology, is a minor mutation on an existing successful replicator.”