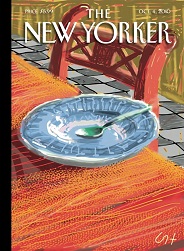 It’s probably a coincidence, but the October 4, 2010, issue of The New Yorker, the same one that contains Alex Ross‘ extended piece on John Cage (“Searching for Silence”), features two poems that involve descriptive passages about sound. This is the Cage article in which Ross reflects on 4’33” — the composer’s famous “silent” work — and notes that “its purpose is to make people listen.” Ross describes the sounds that were coincident with the work’s 1952 premiere, near Woodstock, and later the sounds that emanated from the Chelsea neighborhood in which Cage lived. “Did Cage love noise? Or did he merely make peace with it?” asks Ross.

Perhaps the article was on the mind of the magazine’s poetry editor, Paul Muldoon, when he selected the two poems in the issue. There’s the late Eunice Odio‘s “To W.C.W.,” of which this is the opening half:

The whole arbor is contained in him. It is his will, an entrance to the clear design of the waters. Heavenly music wakes in his ear. (When God stirred, the moon never varied nor the wind, a rumor of approaching dawn, stillness become God’s silence.)

It’s heavily Thoreau-ean, to name one of Cage’s naturalist heroes, and its equation of silence with music is especially appropriate in this context. A biographical sketch at poetrymagazines.org.uk says that Odio was from Costa Rica, and lived from 1919 through 1974. The “W.C.W.” of the title is William Carlos Williams, who passed away more than a decade before Odio did, and who is responsible for the translation that appears in the magazine. (Full poem at newyorker.com.)

And there is “Discrepancies” by Stephen Dunn (newyorker.com), a not infrequent presence in the magazine (he won the Pulitzer Prize in 2001). This is a stanza and a quarter from about midway through the piece:

The small brown bird outside my window has a lilt and a tune. Elsewhere, a baby is screeching. Watch out, little ones, there are hawks, there are sleep-deprived parents, utterly beside themselves.

Like Odio, Dunn makes an immediate association between natural sound and music — the bird sound, while never called bird-song, is noted for its constituent tune. Dunn goes a step further by taking the child’s sound and putting it firmly in the natural world. It is a screech — vocal, yet pre-verbal — which puts the child comfortably alongside the hawks.

Cage taught us many things, as Ross lists them — he prepared us for laptop music, helped get Fluxus and happenings going, welcomed the contrasting elements of chance and procedural instructions. And he taught us to listen. The inclusion in the two poems of sonic imagery, so to speak, reminds us that we don’t just listen with our ears. Sonic attention in the world also means recognizing sound in what we read.

The last poem I noticed in The New Yorker that was especially sonic-minded was back in April, a piece of suburban observation by Jessica Greenbaum: disquiet.com.