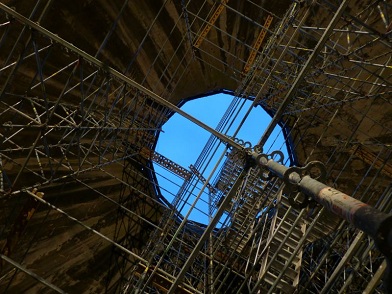 Earlier this month on Twitter I joked that the new Neil Young album, Le Noise, produced by Daniel Lanois, is so packed with echo that it sounds “like he rented Pauline Oliveros & Stewart Dempster’s Deep Listening cave.” Shortly thereafter, Oliveros (aka @olivep) herself replied,

@disquiet If this is so then we have not received any rent money for Le Noise.

Well, based on a recent recording by Berlin/Amsterdam-based saxophonist Thomas Ankersmit, he can be added to the list of Deep Listening devotees. Earlier this year in the Estoian city of Tallinn, he filled a reverberant, abandoned seaplane hangar with echo upon echo of his solo horn (MP3).

The performance was captured (not just as audio, but in the color photos above and below) by John Grzinich, on May 29 of this year. Writes Grzinich of the experience, at maaheli.ee:

We had the good fortune during the recent Tuned City pre-event, to spend some time in the historic Sea Plane Hanger currently under renovation in Tallinn. The idea of working in the Hangar was initiated by sculptor Lukas Kühne who happened to walk by the structure on an earlier visit to Tallinn and hear some echoes emanating from inside. The particular acoustic effect of this site slowly developed into the notion of a ”˜sonic landmark’ the general theme for Tuned City Tallinn 2011. While being a sonic landmark for us, the building is also a historic landmark on the national scale. It was commissioned by the last czar of Russia and built just before the communist revolution of 1917. The domes that make up the roof characterize a style of light freestanding concrete structures designed and built well before such forms were found in the modernist era. The fact that it survived two world wars and the soviet era is also rather remarkable. The hangar is now under renovation and will be turned into a Maritime Museum. For the purposes of Tuned City, the unique arched dome structure of the hangar offered a great example of ”˜aural architecture”˜ with the possibility of artistic exploration and intervention.

It’s often said of live concerts, “You had to be there.” What’s essential about a performance such as Ankersmit’s is that it is so rich in place, so about place, than the recording carries the imprint of that place, is a record of that place. 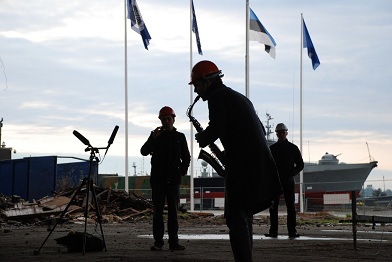 Track originally posted at touchradio.org.uk. More on the Tallin event, which continues next year, at tunedcity.net. 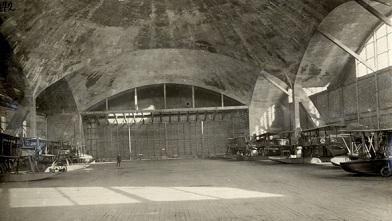 More on Ankersmit at thomasankersmit.net.