As we know from William Gibson’s Pattern Recognition, sometimes fuzzy images that you come upon courtesy of the Internet carry the greatest meaning, if only in terms of mystery.

The following two arrived in quick succession from my mother this evening, straight from her BlackBerry, with no additional information: 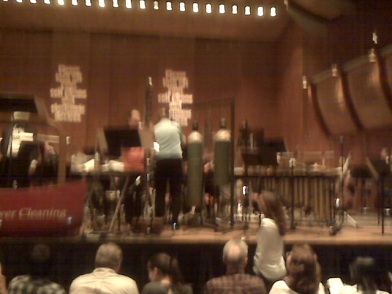 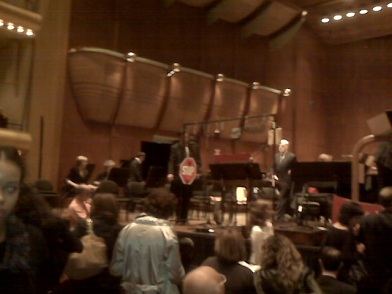 She and my father live on Long Island, and I knew they were headed to a concert that evening, so I guessed that the blurry shots of junkyard metal were from the performance of Magnus Lindberg‘s Kraft, which has three performances this week in Manhattan by the New York Philharmonic. (More on the dates at nyphil.org.) Though the work’s composition was completed a quarter century ago, this is its New York premiere. There’s a great video on youtube.com of Lindberg in which he talks about, among other things, the influence of Einstürzende Neubauten on Kraft:

In a PDF of program notes provided by the Philharmonic, some text from that video is transcribed:

I was living in Berlin in those days, and that was the time when the alternative music scene in Berlin was very strong,with a kind of post-punk music and groups like Einstürzende Neubauten. They had drills on stage, and they made an amazing noise with a kind of non-tonal pop music, and this aspect of it I found very fascinating. In a way, it was a shock for me to see that this kind of music was going on, and I was jealous about the sound — the impact of the sound and the huge forces they managed to put together. And I thought, “Why couldn’t we do this with the forces of the symphony orchestra, which has so much potential in different types of sound?”

After the concert, I received an email confirming my guess. Wish I could have been there.