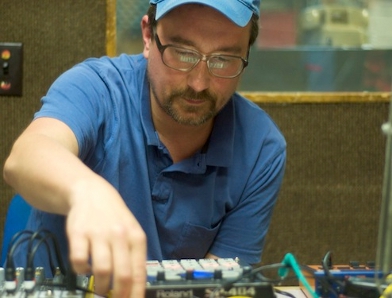 Exactly a year ago, this site’s MP3 Discussion Group got together to talk about an album by Black to Comm, aka Marc Richter. The album, Alphabet 1968, on the Type label, was a rich mix of sounds, both composed and found — as we described it at the time, “from epic drones to compact minimalism, with all manner of lo-fi field recordings mixed in.”

That sonic broadmindedness is in full effect during his nearly half-hour long performance for the Rare Frequency podcast (MP3), in which he moves from splashing drums to guitar solos out of some Ennio Morricone film score, all the while this richly patterned hummingbird burble building slowly, at first almost imperceptibly, until the background becomes the foreground, a pointilist techno fantasy. To hear muted sirens played against automated arpeggios is a splendid thing, especially in Black to Comm’s hands.

Track originally posted at rarefrequency.com. The performance occurred on November 3 of this year. More on Comm/Richter at blacktocomm.org. He also runs the label Dekorder (dekorder.de).