It would be a lie of omission if once in a while it wasn’t mentioned that these stats always seem somewhat less than meaningful, but to paraphrase a fax of a recollection of a misreading of a newspaper report of a leak of Winston Churchill, they’re still of some vague use, if only for apples-to-apples comparison, month in, month out. One thing that is self-evident yet deserves being pointed out about the whole “top 10 posts” mode is that posts made toward the end of a month, like the Hanukkah-remix project entry, or the one just last night about the musical nature of field recordings or about David Byrne‘s audio-text memoir mash, seem to get short shrift. 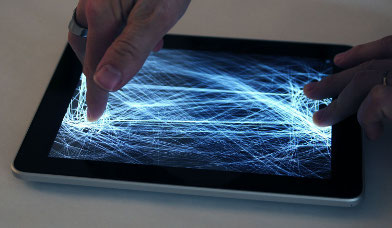 Digits, All: Two hands and up to ten fingers can be used to manipulate the Thicket app on the iPad (shown here), the iPhone, and the iPod Touch.

In any case, three of the top most read/visited/commented/etc. posts of the month were non-free-MP3-downloads. These would be (1) the interview with the developers of the iOS music app Thicket (shown above; “Being Decimal”), (2) our semi-regular MP3 Discussion Group (which compared notes on Brian Eno‘s recent Small Craft on a Milk Sea); and (3) a brief mention (with a truly tantalizing illustration, shown below) of Kevin Kelly‘s book What Technology Wants, in regard to cornet taxonomy. 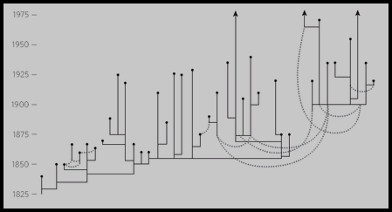 Cornet Taxonomy: A chart showing the development of the cornet, from Kevin Kelly’s What Technology Wants

The rest of the top 10 is rounded out by entries in the site’s Downstream department (freely, legally downloadable music): (4) instrumental hip-hop from Cambridge, Massachusetts’ Tictoc and from (5) Chicago, Illinois’ 22Tape; (6) drones from Argentina (Peregrino, aka Bernardo Durand); (7) IoNizer‘s strings’n’beats EP, Infused Fear; (8) a sound-journal entry from Justin Hardison (aka My Fun); (9) a nearly songless song from Declining Winter (aka Richard Vincent Adams); and (10) despondent techno from Sherbe.

The top searches of the month were: “topic” (that pops up frequently, and I still have no idea why), “bandcamp” (the music-hosting service, not the American Pie joke) “karkowski” (as in Zbigniew, not the 30 Rock actress — that’s Krakowski), “alan morse davies,” “kate carr,” “autechre,” “buddha,” “Buddha Machine,” “Determinism,” “distortion,” “harold budd,” “ionizer,” “myo,” “portrait,” “scary,” and “scherbe.”

This now being December, the start of January will see two top-10 lists: one for this month, and one for the full year.