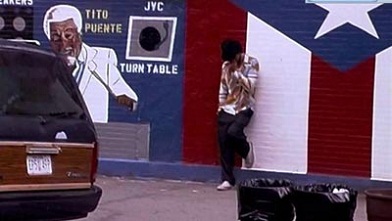 On the Corner: Benjamin Bratt as Miguel PiÃ±ero in PiÃ±ero (2001), a film so rich with artifice that “as” is the active word; music by Kip Hanrahan

I was invited to contribute an essay to a collection online in the publication Perfect Sound Forever about Kip Hanrahan, the … well, what exactly is he? Producer, musician, label founder (American Clavé), conductor, impresario, magician?

That’s a question various contributors to the set of essays touch on, even focus on. Peter Ridley gets to the point of Hanhrahan classification in his essay’s title, “Kip Chose to Be Filed Under Hanrahan.”

My piece, “The Street Poetry of Regressive Loops (Or Vice Versa),” covers the film PiÃ±ero (2001), for which Hanrahan wrote the score, and looks at how the film — which is about the street poet Miguel PiÃ±ero, who rose from a cell block on Sing Sing to win Tony Awards for his work in theater — provides a perfect setting for Hanrahan’s willfully artificial jazz. I write, in part:

[T]here are, arguably, few if any lead roles in Hanrahan’s aural ensemble dramas. The trumpeter in Hanrahan’s band — and this is true of all members of that band — must have the ego of an individual character, and yet the ability to blend into the crowd. And if ever that were the case, it is in Hanrahan’s dynamic large-band score to the 2001 film PiÃ±ero. For in any film, PiÃ±ero being no exception, the music is itself part of a broader ensemble — a multi-media one — and in most cases, its role is subsidiary to the visuals and to the narrative. What’s fascinating about PiÃ±ero, which was directed by Leon Ichaso, is how the film’s subject matter has rich parallels to Hanrahan’s own work, specifically in regard to matters of constructed reality — parallels that the music can’t help bring to the fore.

There are five essays in the set, among them a piece by Jason Gross, editor of Perfect Sound Forever, who in talking about Hanrahan’s cross-genre band-leading compares his efforts to the Gorillaz. John L. Waters, in his essay, likens Hanrahan to an art director, an inspired comparison, stronger than the usual one, which is to a film director. And Jeff Jackson (CJC below) and Jeff Golick (DLD) of destination-out.com work it out in conversation:

DLD: What holds it all together is like this almost cinematic approach Hanraham takes. Though often sprawling, the albums feel thought through, there is a rare creative vision at the center of it. CJC: You mean like Conjure, the album that sets Ismael Reed‘s words to music? DLD: Sure, that; but really each of his records has some kind of overarching mood, or theme, or even just attitude. CJC: “Intelligent passion?” DLD: Well, not if you want to sell records.

Full set at furious.com/perfect. The group of essays is titled “This Song Could Be Rivers …,” and was edited by Colin Buttimer (thanks for the invite, Colin!) who also edits the great album-design website hardformat.org.