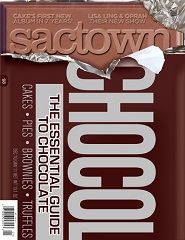 I’ve got a pretty lengthy piece in the current issue of the magazine Sactown, the December/January issue, about the rock band Cake. Now, Cake may not seem like standard subject matter for Disquiet.com, and it isn’t necessarily, but there’s much to the band that’s of interest. For me, the interest was, admittedly, initially personal. I’d hope that most regular concertgoers have had the experience of watching as at least one band forms, goes on to a national audience, and after achieving no small amount of success manages to stay the course. Cake is, for me, such a band. I lived in Sacramento from 1989 to 1996, working as an editor, shortly after college, on Pulse!, the music magazine of Tower Records. I pretty much came of age in Sacramento, as did the band Cake, which formed in 1991 when its leader, John McCrea, moved back to town after a few years in Los Angeles. McCrea worked as a waiter at a cafe run by the wife of a good friend, and in fact McCrea was the waiter at that cafe, named Greta’s, in midtown, the first time I sat down with Adrian Tomine, the cartoonist, who at the time was still a high school student. That’s a story I recounted in part in an earlier piece I did for Sactown about working with Tomine, editing some of his first professional work.

Only one Cake song, to my knowledge, has been sampled for a rap record: the instrumental “Arco Arena” by Heavy D for the song “Guns & Roses” off Jay Z‘s The Blueprint 2: The Gift & the Curse. I’d hoped to learn more about the sampling experience than I did, but it turned out, after several lengthy conversations with McCrea for the article, to be a pretty straightforward permission-granting affair — and perhaps that was something in itself worth learning.

There’s a rigor in the band’s instrumentation and arrangements that almost seems to aspire to the status of automation, and that’s a subject I go into in more detail in the article. The Cake piece, “Going the Distance,” isn’t online, but you can learn about the magazine at sactownmag.com. The band’s new album is titled Showroom of Compassion, and it’s due out January 11, 2011. It was recorded on 100% solar power at the band’s studio, not far from the Tower Theatre in Sacramento.

One more Disquiet-ish Cake thing. This is a lyric from the song “The Headphonist” by the band Kinky, off its album Atlas. On the recording, that’s McCrea guesting on vocals. It goes, in part:

At this moment, I’m listening to a very, very quiet song / I’m walking alone again, with my headphones on again … sometimes it seems like everything I see has a sound and if it does — what is the shape of silence?

I made a brief mention here on Disquiet of the song back in 2004 (“Quote of the Week”), because the lyric was such a poetic depiction of everyday synesthesia, and it seemed especially interesting to hear those thoughts expressed in a pop song: a song about the music beyond songs. I’d apparently been mistaken in thinking that McCrea himself had written the lyrics. As I was researching the Sactown story, he set me straight, explaining that the lyrics were written by the band, and that they may have been the band’s attempt to write a lyric that resembled his own writing style. If there’s a great pop song about that least pop-like form of audio, the art of phonography, this may be it.