Still, we tend to judge one sense differently than we do another. Thus a family’s summer picnic, such as the sort that photographer William Eggleston might have documented during one of his many explorations of American life, has a more immediate audience as a photograph than as, say, an image-free recording of the sounds of that picnic. (The primacy of the visual in the fine arts was the subject of a recent Disquiet.com side project, Lowlands: A Collective Sigh, which was a response in sound to a nasty rant by a British art critic in regard to a sound-only work.)

A rare Eggleston video, titled Stranded in Canton, is currently on view as part of an extensive retrospective of his work at the Los Angeles County Museum of Art. And the audio track of that video serves as a fine example of phonography, one that’s especially interesting because it bears the imprimatur of a master photographer. To begin with, the video breaks down any reverence for the still image — not just because the images move, not just because they are sometimes stripped of their vaunted singularity, and not just because the frame shuffles so loosely as to question the whole idea of a frame. These images are fragments, shot and shown in low resolution, close-ups of body parts, a hand on a guitar, legs severed from their bodies and lingering like columns, the camera moving so as to emphasize segments over the whole. They’re like the opposite of a synecdoche — we see the whole only as an assemblage of parts. And at times they appear in groups, as many as three at a time, so when one is left alone, it has the sense of something vestigial. 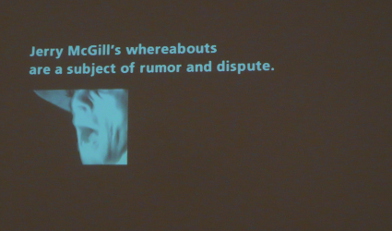 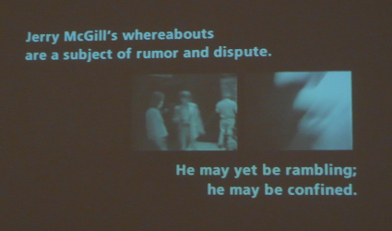 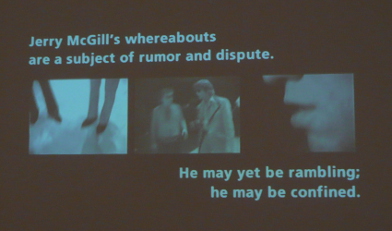 And in the process, the sound associated with these dream-like images serves less as a supporting audio track — with the exception of moments of actual musical performance — and more as a complementary element. As the wall text for the piece at LACMA states:

Here, from youtube.com, is an exemplary segment of Canton:

Eggleston has a strong association with music, thanks in large part to his photos’ appearance on covers to record albums by Alex Chilton (who is seen in the video), Big Star, Joanna Newsom, and others, but for all its musical content, Stranded in Canton is as much about sound as it is about song.

Stranded in Canton was produced by Eggleston and Robert Gordon. More on the exhibit, which runs from October 31, 2010, through January 16, 2011, at lacma.org. The exhibit is titled William Eggleston: Democratic Camera — Photographs and Video, 1961”“2008, and it is housed on the LACMA campus at the Broad Contemporary Art Museum, Level 2.