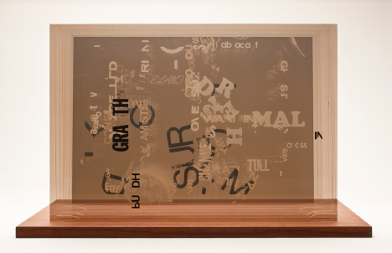 In the highly detailed index to Kenneth Silverman‘s recent biography of John Cage, Begin Again (Knopf), there is an entry labeled “first attempts at” and it is filed under “Cage, John Milton, Jr., prints and visual art.” The index entry directs the reader to two different pages in the book, one at the very start (page 9) and one well past halfway through (page 303).

The first of these is a side mention of how Cage tried his hand at painting shortly after dropping out of college, while living in Majorca, at the same time that he had first tried to compose music; “it was of a mathematical nature,” Silverman quotes Cage, who threw away whatever it was that he had made.

The second describes how, in 1977 on New Year’s Eve, Cage, then age 65, flew to California to, in essence, apprentice at Crown Point Press, the owner of which, Kathan Brown, was intrigued by Cage’s 1969 work, Not Wanting to Say Anything About Marcel, as in Marcel Duchamp, who had died the year prior.

That 1969 work is on display currently at the Norton Simon Museum in Pasadena, California (September 24, 2010, through March 28, 2011), where, along with some complementary materials, it fills a small room off the museum’s lobby. It’s an installation of four sets of eight Plexiglas sheets, set into wood platforms, each sheet emblazoned with bits of typography, as well as a lithograph that suggests multiples of these Plexiglas sheets overlaid upon one another until they’re so dense that light can barely penetrate them. 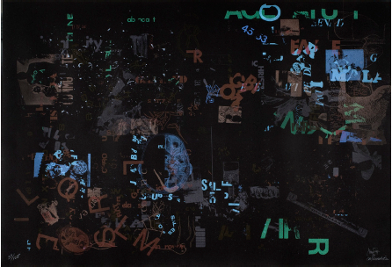 The two images above (up top the Plexiglas set, directly above the lithograph) are both courtesy of the Norton Simon. Below is a side view of one of the Plexiglas sets, as well as descriptive material presented in the installation. (One odd thing: the wall text gives 1994 as the year of Cage’s death, when in fact it was 1992.) There were additional pages that showed how the I Ching hexagrams played a role in the development of these pieces (Plexiglas forms that Cage called “plexigrams”). 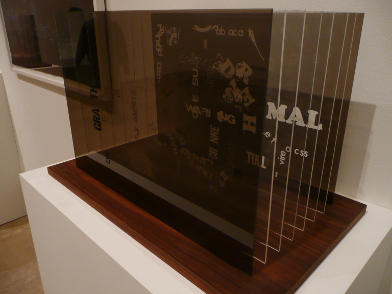 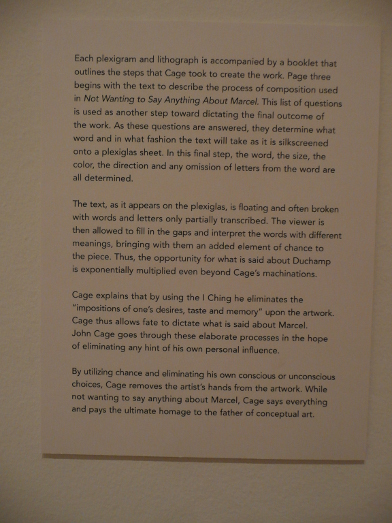 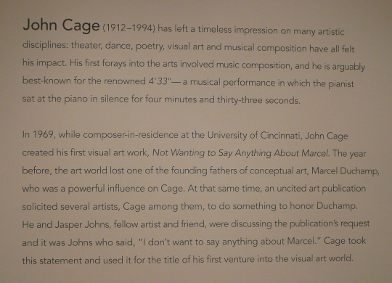 So many of Cage’s works involved written instructions, deliberate procedures, and abstract visuals, it’s hard to know how best to classify Not Wanting to Say Anything About Marcel. Certainly there is no evidence that it was intended to be “played,” and yet it employs visual cues and chance practices, such as the I Ching, that are trademarks of Cage’s music. The Norton installation did a fine job of presenting the work as something akin to frozen music, something that one could walk amid and experience in three dimensions.

The funny thing is, one of the primary reasons we went to the Norton Simon during this year-end trip to Los Angeles was to see the beautiful Heath tile that serves as its encompassing skin. Meanwhile, across town, at the L.A. branch of the revived Heath company, the most recent resident artist had been House Industries (houseind.com), the famed typography institution. And on display at Heath L.A. (the main studio is up in Sausalito, a few miles from where we live) were remnants of that residency, all physical objects emblazoned with fragments or segments of type, like wooden koi and test blocks — all a sort of pop rendering of what Cage’s plexigrams/Plexiglas had done so many years ago.