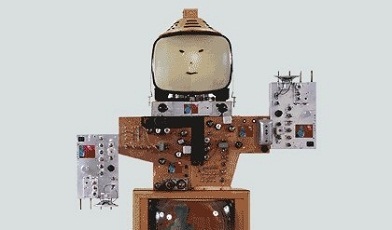 Ezra Pound is frequently quoted in regard to how “Artists are the antenna of the race.” Less often does the rousing quote include its concluding, and considerably more fatalist, clause: “but the bullet-headed many will never learn to trust their great artists.” Not only did the technological work of Nam June Paik foretell the direction of culture, he took Pound’s metaphor and effectively made it literal, by working with broadcast technology, most famously his television sculptures, but also radio, not to mention the tape recorder. Despite those un-traditional materials, esteem for Paik has only grown since he passed away in 2006, so perhaps we’re correct to collectively forget the latter half of Pound’s comment.

The Tate Liverpool is hosting an exhibit of the life and work of pioneering multimeida artist Nam June Paik from December 17, 2010, through March 13, 2011. That’s his “Uncle” (1986) up top. Complementing the exhibit are the standard suite of events, including lectures and films. There’s an especially strong emphasis on appealing to children, which does justice to the play, humor, and warmth inherent in Paik’s highly technological work. There’s even a PDF of an educational guide, which is worth a read.

Part of the overall package is a sizable collection of some 32 MP3s containing information about the exhibit. A lot of the entries are brief lectures on Paik’s work (his use of light, his multimedia cello) and the context in which that work was produced (Paik’s connection to the founder of Fluxus, his interest in nature and Buddhism), but there is an example of his sound art, “Hommage Ã  John Cage” (1958-9), listed as “A live recording of Paik’s musical homage to his friend John Cage” (MP3). The piece, which is just over four minutes in length, is introduced with the explanation that it shows Paik’s “intent to destroy classical music.” Composed for tape recorder and piano, it is a raucous and fast-paced collection of serialized audio fragments, whose key pleasures are the riff-like quality of those highly memorable segments and the drama with which they are artfully and energetically posited.

Get the full set of MP3s at tate.org.