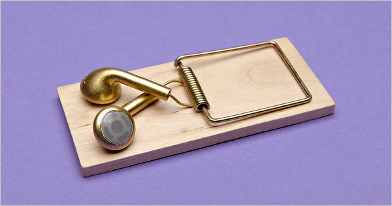 This Bud’s Not for You: Sometimes an editorial illustration tells its own story.

Virginia Heffernan added another in an ongoing string of sound-related entries with her New York Times Sunday magazine column, “The Medium,” this past weekend, this time about headphones — or, more specifically, earbuds. (See also: the sound design of Hurt Locker and the “beep” as a quintessentially human-constructed sound.)

It was essentially a deafness PSA, stating “The number of teenagers with hearing loss — from slight to severe — has jumped 33 percent since 1994.” That’s one of those statistics that’s more meaningful when you know the original number, back in 1994. A lot of people are going to read that as 33 percent of teenagers have hearing issues. It’s in fact under 20 percent. Still a problem certainly, but in addition to lacking the correlative numbers, there’s the additional question of what constitutes “hearing loss.” (Also worth reading: a time.com story from last year about hearing-loss factors cited other than iPods, including nutrition.)

Anyhow, while iPods and the like are very popular, it’s not as if there are no precedents for daily personal-music exposure. The Walkman reigned supreme for many years. Is there something about the MP3 versus the cassette versus the radio that can explain the (perceived) need for increased volume? The cassette, for example, had a benefit encoded into its failings. Its audio fidelity was famously poor, and the inherent surface noise served as a kind of real-world noise-reduction tool. The hiss evened out the lows and the highs. With the MP3, silence is much closer to “true” silence, leaving a lot more room for the world to creep in, and thus prompting people to raise the volume.

Heffernan ponders similar issues, and refers to MP3s, somewhat exaggeratedly, as “intensely engineered frankensounds” and wonders why the resulting audio is “still called music.” She dismisses the pleasure of solo listening as “antisocial,” quoting The Atlantic‘s Llewellyn Hinkes Jones about how the “shared experience of listening” is “not unlike the cultural rituals of communal eating.” Left out: the fact that concert attendance is, in fact, up; communal listening is on the rise.

The article’s accompanying editorial illustration (what I like to think of as the visual display of qualitative information), by Kevin Van Aelst, reproduced above, may have a stronger conclusion than Heffernan does. She says, in the end, “Make it a New Year’s resolution, then, to use headphones less.” However, the illustration says, in effect, “Build a better headphone.” Or, more to the point, use a better headphone.

2 thoughts on “Building a Better Headphone”