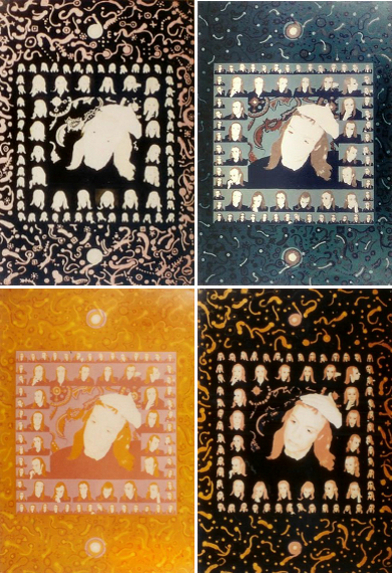 Design Strategy: Four of 1,500 prints of the cover of the Brian Eno album Taking Tiger Mountain (By Strategy)

Â¶ Burning Bright: John Emr‘s ongoing website-as-hommage to the late artist Peter Schmidt, perhaps best known for his work with Brian Eno, has posted two particular treats of late: the program to a London ICA exhibit titled “A Painter’s Use of Sound” in 1967 and Schmidt’s typed description of how, at Eno’s request, he had developed 1,500 unique prints of the cover art to Taking Tiger Mountain (By Strategy).

Â¶ Old Albion: If you have access to Spotify (which a lot of us, say living in the U.S., do not), you can access a playlist that Rob Young put together to complement his book, Electric Eden: Unearthing Britain’s Visionary Music. More at electriceden.net.

Â¶ Reel Life: According to pitchfork.com, David Fincher has signed Trent Reznor and Atticus Ross to score his next film after The Social Network, the American remake of The Girl with the Dragon Tattoo. … The three parts of last year’s BBC documentary on Brian Eno streaming: 1, 2, and 3 (via metafilter.com and musicofsound.co.nz). … Documentary, half hour long, on the widely adapted open-source electronic gadget Arduino: vimeo.com (via via the-palm-sound.blogspot.com). … According to imdb.com, composer Cliff Martinez is reuniting with director Steven Soderbergh. Martinez is attached as composer to Contagion; it would be their first work together in almost a decade, since 2002’s Solaris. Martinez is also reportedly on The Lincoln Lawyer and The Salesman. … Speaking of Soderbergh, he’s brought another colleague back, working with David Holmes (the Ocean’s films) on Haywire from a script by Lem Dobbs (The Limey). … No composer is attached, as of yet, to Soderbergh’s Liberace. … Lisa Gerrard is on Samsara, Burning Man, and InSight. … Clint Mansell has re-teamed with Moon director Duncan Jones for Source Code. … With the exception of the Eno and Arduino documentaries, which are already out, these are all due for release in 2011.