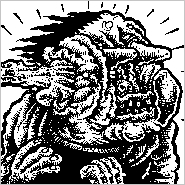 It was nearing the half-year mark for the hexawe.net netlabel — a half year since it had last made public one of its tantalizing bits of abstract chiptune-flavored sample-packed near-anarchic music. But then, fortunately, came “Fat Punch,” credited to Kool Skull (MP3). It bears all the marks of a hexawe.net track: the phaser sound bites, the cut’n’paste madness, the arcade-on-fire intensity, the broken-speaker fuzziness. And like all the label’s releases, it came accompanied by a Zip archive of its constituent parts, allowing you to play with them in the freely available software from littlegptracker.com. You needn’t even install the Tracker software to get a taste of Kool Skull’s track’s inner workings. While the full piece is highly enjoyable, I recommend downloading the Zip file and playing all but the two longest samples (the only two longer than a second) set on random in your MP3 player of choice.

More on Kool Skull (aka Juan Larrazabal, of Los Angeles) at datamoshpit.com/koolskull and soundcloud.com/koolskull.

One thought on “Arcade on Fire (MP3)”