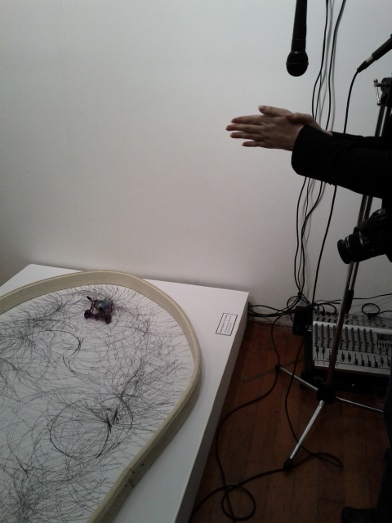 The title of the current group show at the gallery Robert Berman / E6 in San Francisco, Say Something!, is an invitation to the verbal — which is to say, to the spoken and, thus, to the heard. So, it’s no surprise that several of the pieces take sound as their source material and subject. Welcoming visitors close by the entrance is Jordan Kantor’s oil-paint rendering of the title of the album Raw Power by Iggy Pop and the Stooges, its font consistent with the original but the words reproduced on a blank white backdrop. Is it a challenge to the viewer, or to the staying power of those words and the music whose ferocity they announced? Perhaps both.

On opening night, this past Saturday, January 15, two pieces in particular appeared to embrace aurality: one an exercise in interactivity, the other an inspection of a San Francisco classic.

Opening nights can be the worst time to experience sound art, because the noise of well-wishers and collectors muffles its impact, but if anything, Peter Foucault‘s installation, “Attraction/Repulsion: Redux IX,” benefited from the crowd. This is because its microphones use sound from the audience as a trigger to direct a little robot that draws a line on a piece of large-format paper. Multiple microphones dangled from the ceiling, inspiring some to competitive bouts of applause. The result is like Robert Ryman’s idea of a Spirograph drawing. Foucault’s piece has a kinship with the tradition of graphic scores, in which non-standardized images provide visual instructions to musicians. He simply reverses the direction: the chaotic geometry presents the sonic element of his work in retrospect, the map as hindsight. (And speaking of noise, Neil Young, fresh off the release of hits recent album, Le Noise, was seen at the gallery on Saturday.) 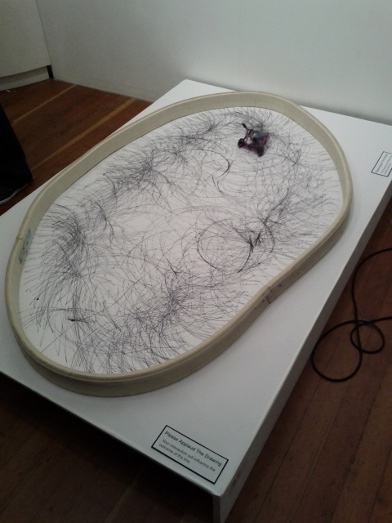 Crowd Pleaser: The card reads “Please Applaud the Drawing: Your interaction will influence the outcome of the line.”

There is only one voice in Tom Comitta‘s “Howl in Six Voices: an Inflationary Erasure of Allen Ginsberg’s ‘Howl'” and that is the voice of the poet himself. Comitta located a recording of Ginsberg reading his best-known poem, and then edited it based on carefully defined procedures. The result is six different takes on the poem, each reproducing in sequence only the words containing a specific vowel (the sixth track adds “y” to the standard “a,” “e,” “i,” “o”, and “u”). The tracks are collected on a CD protected by a letterpress cover that presents the work’s procedural recipe, and also takes the ephemeral product — the sound recordings — and makes them contained, collectible, possess-able, albeit to a limit: Only 50 were copies produced. 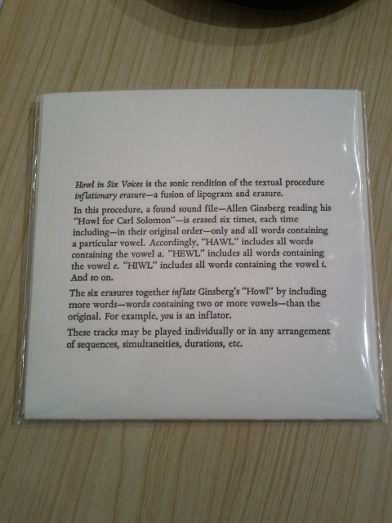 And Sometimes Y: Letterpress cover (above) and gallery installation (below) of Tom Comitta’s edit of Allen Ginsberg’s “Howl” 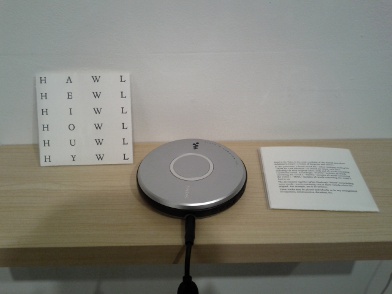 Each of the six renditions translates the familiar verse into something hallucinatory. The original emerges in your memory, hitting the cues provided by the fragmented phrases of Comitta’s reduction. His precise efforts suggests a distant, straight-edge cousin to the cut-ups of Ginsberg contemporary William S. Burroughs.

That video, above, of the “o” track is from Comitta’s youtube.com/user/tomcomitta page. The post includes some information additional to what appears in the letterpress cover:

1. No temporal “breaths” could be added–every word must be snug against the ones preceding and following it. (If there is a temporal gap between words, it happened to fall between two words that shared that particular vowel.) 2. Every word had to be given its due time–curtailed just at the beginning and end of its articulation. From action to decay

More on the gallery, which is located just off Market Street, at e6gallery.com. The Say Something! exhibit runs from January 13, 2011, through February 19, 2011. More on Foucault at peterfoucault.wordpress.com. Comitta’s site, tomcomdotcom.com, has a “coming soon” notice.

Postscript: As always, this site is focused on the intersection of sound and art. There’s non-sound art in the Say Something! exhibit, and other pieces that have sound to some extent, such as video. The gallery’s website has a full list of participants and numerous photos of the installed art.