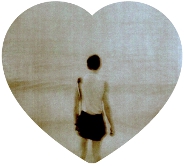 Even if the track by Radere weren’t titled “Lost at Sea, I’m Never Coming Back,” you’d need some serious, veteran avant-drone sea legs to make it through without getting the sense of being out on open water. It rocks back and forth like a ship in a storm, and it has a rough texture like the noise a microphone inadvertently records when it does battle with the wind (MP3). And then there’s the sense of moisture, not only the rain storm of white noise that floods the track, but the extent to which the track feels at times like it is dissolving. And then the storm abates, and the overall impression moves from downpour to cloud break — though, to be clear, land is never in sight.