Sounds from an Exhibition (MP3) 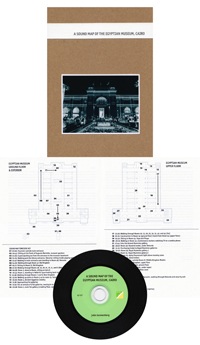 The sound artist John Kannenberg asked me to write an introduction to his forthcoming album, A Sound Map of the Egyptian Museum, due for release on April 22 on the label 3leaves, run by Ãkos Garai. The album is an hour-long assemblage of field recordings that Kannenberg made in and around the main museum in Cairo. It is drawn from the same material that comprised his tribute to slain musician Ahmed Basiony, which I wrote about shortly after his death earlier this year. Though the raw materials are just that, straight-to-the-mic audio of people talking and moving amid the structures that define the museum, and of the ambient sound of that space, Kannenberg’s finished work is a thoughtful and thought-provoking edit, in which abstract and representational audio is sequenced with a sense of narrative and the hallmarks of sonic composition.

This is my text:

“Reflections and Transformations” Fifteen minutes into John Kannenberg’s extended, hour-long sound map of the Egyptian Museum in Cairo, the setting subsumes the sound. More to the point, the setting becomes the sound. His sound map is constructed from field recordings he made in and around the museum, and the museum at that moment moves from structure to participant, from frame to portrait, from context to subject. Voices had been heard up until that point, a rumbling and slow-moving pack of adult humans, but those voices are suddenly transformed, dramatically, at the quarter hour. The rapturous transformation is, presumably, the result of the architecture. The human voices are no longer discernible as such, and instead congeal into a chaotic frenzy as their sound is reflected off some hard, high, voluminous ceiling. Something about that ceiling, arched and closed in by thick walls, absent of anything with absorptive characteristics, no fabric or wood, shoots the collected voices around like balls in a pachinko game, all the sound scattering and intersecting with such speed that it becomes a single thick blur of noise, resplendent noise. That description of cause and effect is entirely conjecture, of course. The recording is solely audio, and we do not know for certain what we are hearing. We don’t know how many people, if they’re adults, or what the characteristics of their environment is at that moment. Much as a passing bus can be mistaken in our own daily life for a child’s cry, we do not know exactly what these sounds are, or what is transforming them. It is a fact that the shape and constituent parts of a building will enact changes on the sounds emitted within it — but it is no less true that our knowledge of the place frames how our ears and brains perceive the sounds, lends them meaning, fills in the considerable gaps in our factual knowledge. This hour-long montage of field recordings is an illusion of reality, an illusion during which Kannenberg plays with our imaginations. The key word above may not be “transformation” or “architecture,” but “reflected.” It’s a word we’re more likely to associate with light than with sound, and thus is the perfect fulcrum point for Kannenberg’s art, the art of the phonographer actively challenging the photographer for the primacy of the senses.

The label website provides a brief excerpt of the final work, and while it doesn’t showcase the manner in which Kannenberg produced a fictional reality in sound, it does provide a glimpse at what he worked with: a docent speaking of ancient kings, murmurings, water, foot traffic (MP3).

It sets the stage for the finished release, in which those and similar fragments are woven into a considered whole.