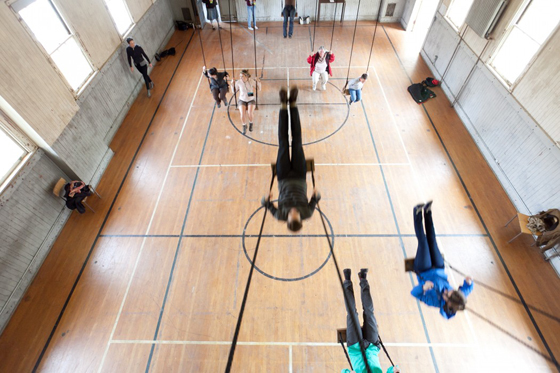 The artist Paolo Salvagione has been principal engineer on the clock of the Long Now Foundation since he joined the project in 2000 (or, as they count over at the Long Now, the year 02000). In his spare time, his own artwork fuses the conceptual and the mechanical, to varying relative degrees. He asked me to write an essay to accompany an installation he debuted yesterday, April 17, at the Headlands Center for the Arts in Marin County, just across the Golden Gate Bridge from the Richmond District, where I live in San Francisco.

Salvagione’s work is titled “Competitive Swinging,” and it resulted from an invitation he accepted to use the historic gymnasium, building 952, at the Headlands, which is based in the decommissioned Fort Barry military grounds, the structures on which date from 1907. “Competitive Swinging” consists of two sets of five swings set facing each other. The hardware from which each swing is suspended was reproduced by Salvagvione, who based the design on that of the original (and long in decay) equipment in the ancient facility. (When asked, on the phone, how they are doing, whereas most people will say “well,” Salvagione tends to respond “welding.”)

His invitation to me to contribute an essay came with an enticement: it would be printed on A5 cardstock on a letterpress by Rocket Caleshu of the San Francisco Center for the Book (sfcb.org), from a design by Brian Scott. (That’s Scott of Boon Design, boondesign.com, which among other things created the “cover” art for the Disquiet.com compilations Our Lives in the Bush of Disquiet and Anander Mol, Anander Veig.)

Here’s the text I wrote:

The gymnasium is the art gallery of physical activity. The room is Spartan: bare floor, tall ceiling. The room is Platonic: an expansive blank space. The room is Euclidean: its markings an elegant geometry that has survived well into our quantum era. Those markings, circles and straight lines, set down rules by projecting the contours of human motion.

The gymnasium sits empty for extended periods of time, in between instances of intense, sweat-inducing competition. There is the sweat of the competitors, and the musk of the anxious audience. The sweat lingers.

Paolo Salvagione’s “Competitive Swinging” seeks to address the disparity. It lifts the curvilinear markings from the floor and renders them in space. And it renders them with the weight of the seated human body. It sets five of these bodies against another five, two rows of nearly invisible bleachers suspended in the air. Each body traces a pendulum in the air, ten flesh clocks marking time.

The pendulum plays with the whole notion of physical exertion. As Salvagione explains, “The thing about a pendulum is that its period, the time it takes to traverse its course, is constant. We’ve known this since Galileo. Even as you go higher and higher on a swing, it still takes the same amount of time to cross the same point. The weight of the bob at the end of the pendulum doesn’t matter, even if that bob is a person.” Each participant swings at his or her own pace. Sweating is optional.

There is a third competition as well. It’s a matter of time, but time whose measure is longer than the arc of a pendulum. It’s the competition of a building against the elements. It’s the matter of a gymnasium that, like the bodies that long ago sweat on its floors, eventually reaches the point of physical decline. The gymnasium is an art galley of physical activity — until it is simply an art gallery. 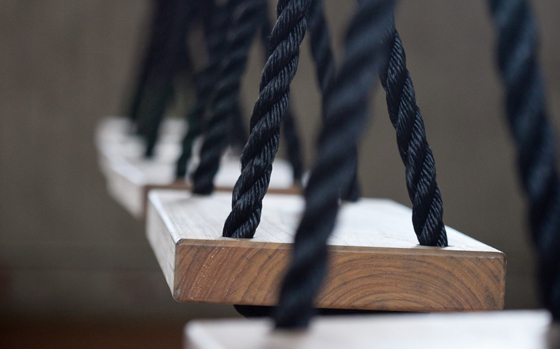 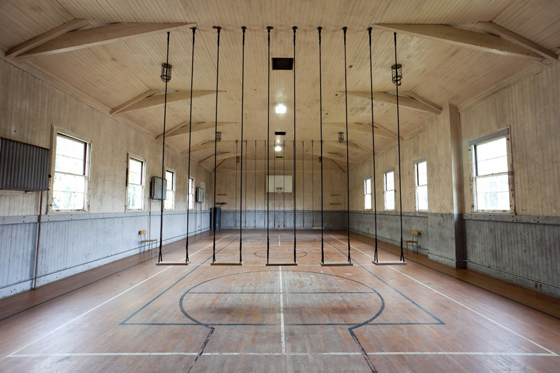 Images of the letterpress version of my essay: 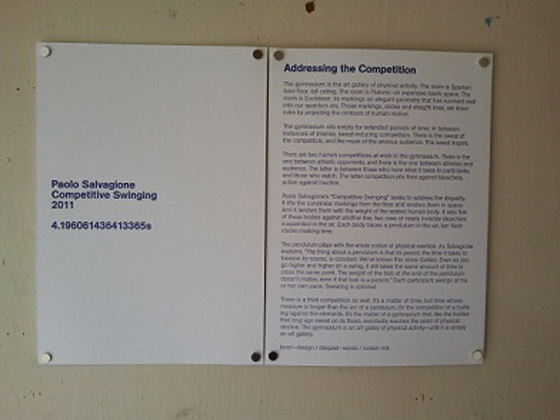 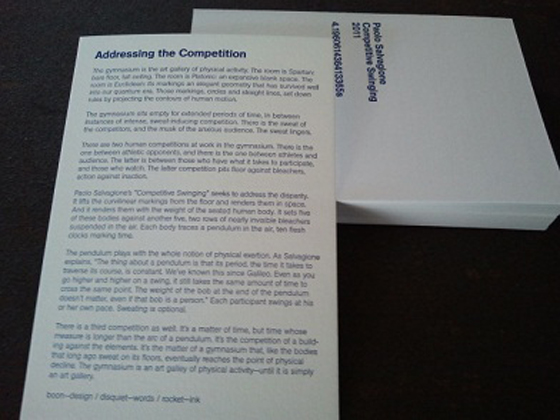 Unrelated, but this mass of sonorous rust is the bell in the communal kitchen at the Headlands: 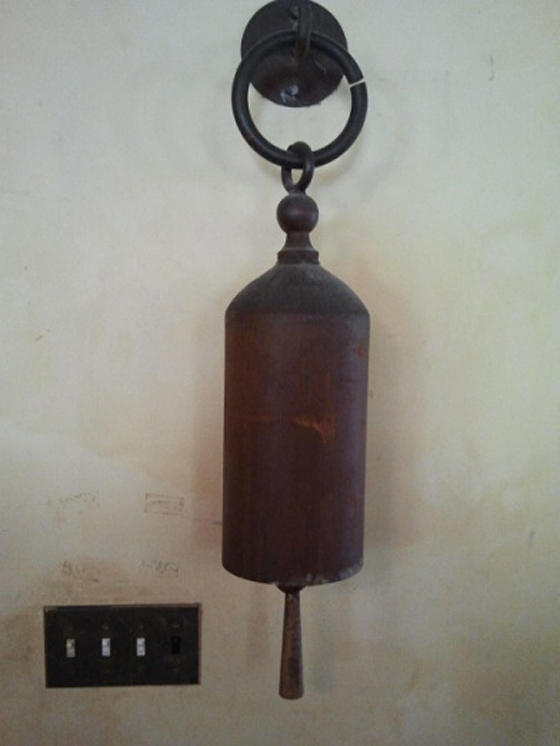