Before reading anything about this track, just give it a listen. Know that it’s by Richard Devine, the electronic musician known for his aggressive exploration of new recording technolgy, his appetite for the latest audio software, and his expansive work in sound design.

That is, despite a surface reading of Devine’s resume, not a chaotic system whipped up in a beta edit of a generative-audio toy for the iPad, nor is it a live performance document from a European music festival. It is an unedited survey of the life under the surface of the water in Crystal Waters, Florida, where Devine recently spent time with a hydrophone.

We took a boat out to … specific locations including Kings Point Bay, Shell Island, and Mouth of Rainbow River. Here we captured some bizarre sounds of Dolphins communicating, thousands of shrimp feeding, and the distant moan of the Hypostomus Plecostomus catfish. 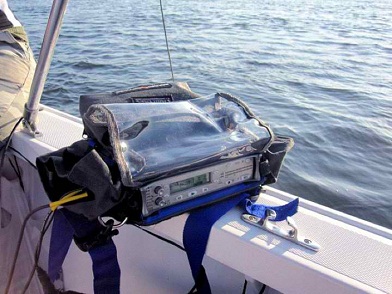 The above image accompanied the hydrophone recording at soundcloud.com/richarddevine.

One thought on “Fish Head(phone) MP3”