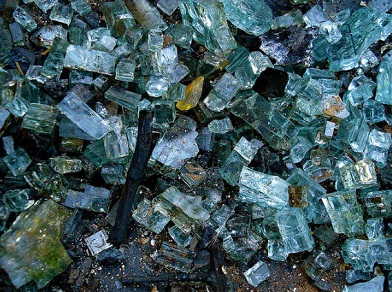 Two days ago, after spending many hours with nothing playing but an MP3 that consisted in large part of the mechanical sound of an old turntable making its rotation, I had the sense that I was still hearing the track, even though I was miles from the house, pushing a bright orange three-wheeled stroller in which dozed my eight-month-old. This was along Golden Gate Park, where people regularly park their cars with the apparent interest in having their passenger-side windows broken. The sidewalk there is littered daily with glass, which collects in these dry glistening pools. I had navigated just such a pool of reflective shards, and one of those shards had, it turned out, embedded itself in the rear left wheel of the stroller. With each rotation, there was a scratchy sound, which in time took on the metronomic significance of a beat. The beat sound, in turn, so to speak, brought the ear to bear on what happened the other 350 or so degrees of rotation, when the wheel regained its grip on the pockmarked sidewalk. The sound of that portion of the rotation was weathered down, in a sandpapery way. I reached for my phone, continued to push the stroller, and used the bright red Record button in the Soundcloud.com app to tape 20 seconds of this beat. (It’s an Android phone, but there’s also an iOS version of the app.) The result is as follows:

Some comments began to accumulate on the page where the track is posted for streaming and download, and then 24 hours later an email arrived from Thomas Park, who records prolifically under the name Mystified. He had commented the day prior on my track, which I had titled “Broken Glass in a Stroller Wheel,” and in the intervening hours he had taken my track and produced something new from it, which he titled “Stroller Groove”:

Just looking at the waveforms of the two recordings, it’s clear that only one of these has the inaccuracies inherent in natural-world sound (even if part of that so-called natural world is a mass-produced, human-powered vehicle). The Mystified remix starts with a brief loop selected from the original track, and slowly accrues a veneer of minimal techno. As such, it provides an echo of my walk, in some manner resembling the way that my walk had provided an echo of the turntable MP3 to which I had been listening earlier in the day.

(Above photo from flickr.com/photos/wheatfields via Creative Commons license.)