The Studio 360 podcast recently focused its microphones on “The Blind Astrophysicist,” as the episode was titled. Its subject is a sight-impaired astrophysicist named Wanda Diaz-Merced, who is from Puerto Rico. According to the reportage, Diaz-Merced began to lose her sight as she was pursuing her studies. She talks in the interview (MP3) about how all her fellow students were straining their eyes to read all the tiny markings in their research data, while she was much more aggressively losing her own vision.

To hear this woman’s voice is to meet someone who doesn’t know of despair, or certainly has an unusually high threshold for it. She tells the story of how she came to explore sonification (alternate terminology: she calls it audification, while the host, Ari Epstein, calls it ensonification), in which data is presented in a way that can be likened to a musical composition. There’s a particularly good anecdote about how during a visit to a computer lab she heard the squeal of data as it was being crunched, and recognized a burst in the static that turned out to be a sunburst. And an even better one when we learn that her computer-programming collaborator is … deaf. 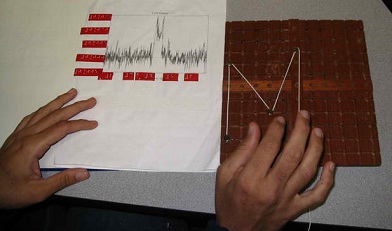 Above is an image from the Studio 360 blog, showing “a graph marked with Braille tags on a pegboard to plot the intensity of light versus frequency for a spiral galaxy. She can figure out the mass of the galaxy by calculating the area under the curve.” It’s just one example of how Diaz-Merced pursues her research not just despite her diminished sense, but because of the manner in which she has learned to make all the more of her retained senses.

The broadcast, of course, focuses less on the tactile than on the aural. Things tagged as or referenced as “sonification” are often transformations into sound art or music information that originated as data that had no express intent to serve as art. Diaz-Merced’s astrophysics projects straddle that line, in that she’s working on music-production software that feeds on data and produces tunes. Still, host Epstein summarizes well the practical research benefits of her efforts: “Even people who can see just fine are better at detecting patterns if they can hear a soundtrack while they’re watching the computer draw a graph. their ears are working in sync with their eyes, to immerse them in the data.”

Original post at studio360.org. The Studio 360 site provides this link for additional info on Diaz: icad.org. Subject originally located via “Senses Working Overtime,” from the blog of my old friend Andrew Jaffe (we went to college together), who is an astrophysicist himself, at Imperial College in London; he also provided this link to Diaz-Merced’s research at Harvard: harvard.edu.