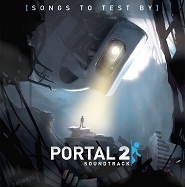 For all the benefits of free music, something celebrated here on Disquiet.com almost daily, it’s hard not to read some free offerings as a reflection on relative cultural status. The Grammy Awards, in its not uncontroversial recent revamp, finally added a video-game-score category, while doing away with numerous other genre-specific awards (the latter move having many calling foul). Yet it’s not like these scores are doing particularly big business — at least not as recorded standalone fixed artifacts. As part of the ensemble creativity that goes into video games, they are an essential and largely overlooked component of interactive media. But when a property like Bioshock puts its full score online for free, as it did back in 2007, and as now Portal 2 has also done, it’s hard not to sense that the companies doing so know that the artifacts are just that, shards of experience.

A formal game score release is as much a parody of a movie score as it is a parallel. Music in video games by and large doesn’t progress the way it does in a film — it shifts according to how the game play proceeds, and that is based almost entirely on decisions made by the player. Thus, the game score lacks not just the visuals, but the sense of user-directed flow, the manner in which play directs causality.

The score is available, along with a handful of Android- and iPhone-ready ringtones, for free download at the official Portal 2 site, thinkwithportals.com.