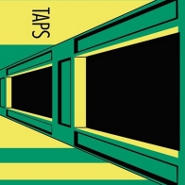 The beat is hard and slow, and there’s what could easily be a melodica moaning away up top. It takes a while for the melodica-like sound to make itself heard. First it’s just that beat, and deliciously so. It could be a distant train bell, but it sounds more like a clanging pipe heard through a thick wall, hard but muffled, muffled but undeniably hard. Then, as if on schedule, right on the minute mark, there’s a brief chord, and then more clang. What follows is a slowly developing melodic line, like something out of an Ennio Morricone score, but even more reminiscent of mid-1990s experimental dub, most notably Calvin Johnson’s Dub Narcotic Sound System.

This is “Taps – Fixtures,” one of two tracks on a self-titled EP released by Taps late last year at taps.bandcamp.com. If the pop realm of dub took Morricone’s sound (along, of course, with that of the music’s Jamaican originators) and traded its melodrama for something more pithy, music like Taps’ goes in the opposite direction. The sound of “Taps – Fixtures” (and of its sibling track, “Raining in Your House”) is admirably attenuated. It takes dub as structure not merely as effect.

That opening minute deserves particular attention. It’s truly a full minute of this soggy beat. That Taps is willing to bet on its audience’s patience is one thing. Better yet is how it takes the opportunity to truly sound out a space before introducing the more familiar dub elements, elements that are intended to suggest depth but that, adhering to genre, sound essentially the same whether in a small room or a large hall.

Taps is Chris Strunk and Brendan Murray. The two songs are available free at taps.bandcamp.com, but it’s in a pay-what-you-like system, so why not toss in a few bucks?

One thought on “Dub as Structure Not Merely Effect (MP3)”