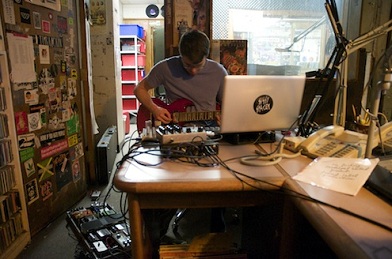 The opening of the performance by Mike Shiflet on the Rare Frequency podcast sounds like the phonographer’s equivalent of an orchestra warming up. The mic, by definition, is on, because there is noise — two or three noises, you might say: the close-by variety, the distant variety (a car drives by early on), and then a rattly series of sounds that suggest Shiflet still setting up his equipment. More likely than not, this is all illusion. More than likely, it’s being performed, as the above photo suggests, in the confines of a room with four walls, a ceiling, heating, and grounded electricity. But it sounds rural, deeply so (MP3). The whir of bugs, a dank murk, unstable circuits. There’s a horror-movie aura, but not truly filmic; it’s the same feeling that infests a campsite shortly after dark.

Only well into the work does the guitar, Shiflet’s primary instrument, come to the fore. He describes in an interview also at the Rare Frequency site that he’s increasingly employing the guitar for tonal purposes. In time it moves from tonal to something almost melodic, though it’s a melody that moves its way through the accumulated murk like a series of tentative footsteps — not tentative on Shiftley’s account. He knows exactly what he’s doing. The guitar needs to be cautious because as the one discernible traditional instrument in the bed of sounds, it stands out. Shiflet could easily have made his own job simpler by leaving the guitar at the level of tone, just another hazy element in the mix. What’s admirable about the track is listening to the guitar make itself heard, like it’s walking on lily pads, and trying hard not to make waves.

Track originally posted at rarefrequency.com. More on Shiflet at michaelshiflet.com.