The cassette tape loop is an elegant tool from a more civilized age, not as clumsy or random as its modern, digital equivalent. In the time before easy access to digital audio tools, it provided an inexpensive means to achieve continuous layering: one tape head writes while another reads. Each time around, new sounds are accrued while previous sounds get slowly buried in the mix. The length of the loop has several determining factors, key among them the length of the piece of tape on which the sounds are being recorded: how much time passes before the splice comes around again.

Last year I wrote about Marcus Fischer’s elegant five-spindle adjustment of the common cassette tape, the result of which wasn’t just supremely practical, but also quite visually lovely. In order to loop endlessly, the cassette is altered to bypass one of its two spools, and the three additional spindles (the traditional cassette has two) maximize the length of tape within the cassette casing. The end result has the slightly off-the-norm appeal of such happy mutant icons as the album cover to Todd Rundgren’s Nearly Human, in which a human hand’s sixth finger isn’t immediately evident, or the darkly whimsical silhouettes that serve as interstitial cards in the TV series Fringe.

Innovation begets innovation, and so now we have Jared Smyth‘s seven-spindle cassette tape, which he reports, at uprlip.com, to be capable of a nearly 30-second loop: 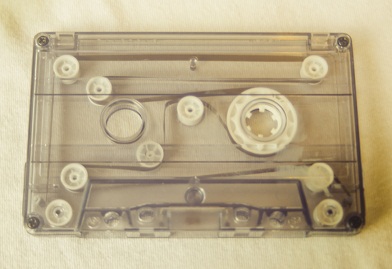 Smyth also posted an MP3 of some of his sound experimentation. It’s a slow, lulling work, with a sing-song undercurrent that brings to mind the early tape loops of Brian Eno and Robert Fripp, in particular their Evening Star collaboration. To listen to the loop slowly take on additional elements is an enjoyable process, as bell tones, small figurations, and light textures begin to combine.

Smyth sent me a note making me aware of his experiment, and I asked him if he would post a video, so people could see (and hear) it in action. He quickly provided this, and in it you can see, about every 19 seconds or so, the white vertical strip of the splice making its rounds:

Smyth says he communicated with Fischer, who gave him some splicing advice. The seven-spindle project builds on an earlier, six-second tape loop that Smyth created, perhaps the most basic of cassette tape loops in that it only uses the two spindles that are part of the standard cassette tape structure: 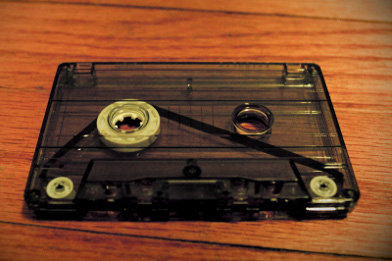 He also posted a short piece recorded on the six-second looper (MP3):

And Smyth’s adventures aren’t nearly over. In addition to learning to master splicing, he reports of his desire to increase the spindle density: “I really think I could squeeze two more in there.”