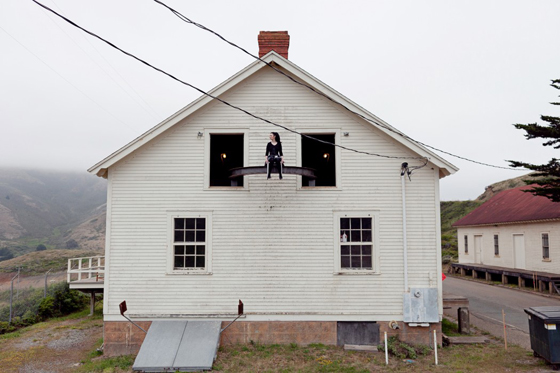 The artist Paolo Salvagione has been principal engineer on the clock of the Long Now Foundation (longnow.org) since he joined the project in 2000 (or, as they count over at the Long Now, the year 02000). In his spare time, his own artwork fuses the conceptual and the mechanical, to varying relative degrees. He asked me to write an essay to accompany an installation, named “Orbit,” that he debuted recently at the Marin Headlands Center for the Arts — just north across the Bay from where I live in San Francisco. It is the third of his projects that I have been invited to contribute to. I supervised the score to the video that documented his exhibit “An Excuse to Respond,” and I wrote an essay to accompany an earlier Headlands installation, “Competitive Swinging.”

As with the “Competitive Swinging” essay, this one was printed on A5 cardstock on a letterpress by Rocket Caleshu of the San Francisco Center for the Book (sfcb.org), from a design by Brian Scott. (That’s Scott of Boon Design, boondesign.com, which among other things created the “cover” art for the Disquiet.com compilations Our Lives in the Bush of Disquiet and Anander Mol, Anander Veig.)

There’s a solid description of the installation at baycitizen.org:

[“Orbit”] is an enormous wheel with one chair attached that people can strap themselves into. They are then slowly rotated from within a dark room out a window and back into another window until they complete the circle. Once outside, they take in the sweeping vista of the surrounding Marin hills. It takes about three minutes to complete the circle, meaning that the viewer becomes the viewed, as those inside the room watch riders spin languidly in and out of the space.

Letterpress seems especially appropriate to Salvagione’s work. The technology can lend a sense of antiquity and effeteness to its subject, but the opposite is very much the case with “Orbit” and, earlier, “Competitive Swinging.” Both those works have a sheer, monolithic physicality to them, and the letterpress reminds us of that weighty impression with the words embedded in the thick card stock. 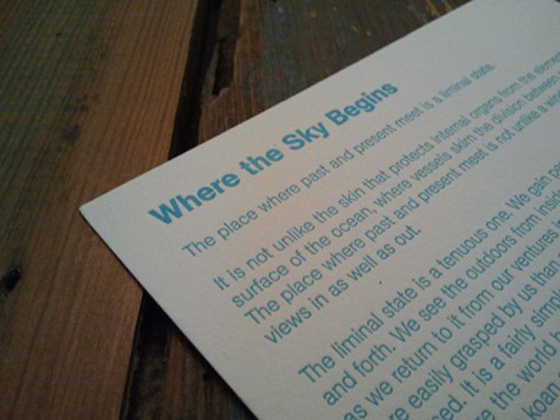 The plot of land that is the Headlands Center for the Arts was, not so long ago, a military base. The splendor that we think of today as bucolic masked, not so long ago, an institution founded on anxiety. The hills were alive with the low level hum of constant preparedness. The grassy hills were the sort of place where weapons were tended to, where stations were manned. And it was the sort of place from which the coastline was observed vigilantly for signs of invasion.

To look out a window from a Headlands building today is to see a view not dissimilar to what someone saw when it was under military control. And at times, bits of the past peek into the present: ordnance remnants, dilapidated bunkers, arcane signage.

How might we gain perspective on a place, on its history, especially when its past and present purposes are so distinct, almost at odds with one another?

We might look out a window and ponder that which others saw before us. Or we might venture further. We might take a seat in Salvagione’s circular sculpture and submit to its slow orbit. We might look out a window, and then pass through that same window, following the path that our eyes had laid out for us. We might take in the panorama by engaging with its circumference, enacting its circumference: viewing not only the distant structures and foliage, but the exterior of the building itself as the ride turns back, completing its cycle. We might, with some ease, find ourselves circulating between worlds. 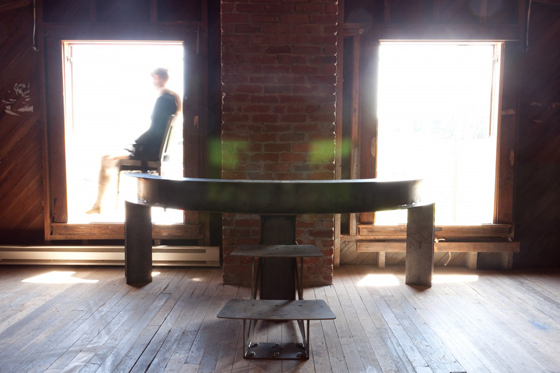 The place where past and present meet is a liminal state.

It is not unlike the skin that protects internal organs from the elements, or the surface of the ocean, where vessels skim the division between sea and sky. The place where past and present meet is not unlike a window, which allows views in as well as out.

The liminal state is a tenuous one. We gain perspective only by cycling back and forth. We see the outdoors from inside our home, and we see our home as we return to it from our ventures in the world. Some of these states are more easily grasped by us than are others — more easily sensed, observed, accessed. It is a fairly simple exercise to determine where your body ends and where the world beyond it begins — easier, say, than resolving the atmospheric koan as to where, exactly, the sky begins.

Certainly, we cannot step into the past with the same ease with which we can open our front door. However, once we accept that the division between past and present resembles more familiar liminal states, we can map common experiences onto the more esoteric.

To take a seat on Paolo Salvagione’s Orbit is to ride that liminal state. To buckle in and pull tight its strap is to acknowledge the tenuous nature of being in between realms, as if taking precautions against psychic turbulence, as well as physical injury. To take that seat is to enter a mode of technologically mediated meditation. To submit to Orbit is to momentarily float free from gravity, free from now.

An earlier draft of the essay took the form of a short story that told of a romance between an engineer and an artist, and that borrowed structurally from the implicit symmetry of Salvagione’s piece. I may post it at a later date. 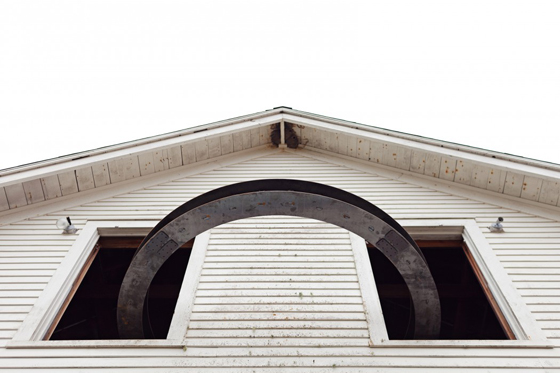 All photos, except the one of the cardstock, by Andria Lo (andrialo.com)

One thought on “Orbit: Where the Sky Begins”